A US road trip nothing short of quirky and odd occurrences

A few years ago, I decided to head to the USA for a cross-country road trip. I chose to do this with an organization specializing in such trips partly to avoid driving, as well as to get a more genuine experience.

Deciding to embark on such a trip was already an adventure in itself, even more so camping in the middle of nowhere every night with 13 strangers. We had to ensure to put away any food to avoid being raided by bears and sometimes chose to sleep under the stars as coyotes howled and scuffled past us. I’m surprised at how I even survived this trip.

The itinerary consisted of a number of national parks, big cities, and some odd spots along the way that made this trip one of the quirkiest experience ever. At first, each of these weird moments made me question if this trip was a good idea, but as the weeks went by, a certain dose of quirk was expected.

Although I can’t imagine myself living an Amish lifestyle, part of me envies the simple life they lead on a day-to-day basis. They get around by horse and buggy and live a life free of modern technology, including electricity.

The clothes are extremely basic, and beards barring a moustache amongst men are practically a requirement.

Buildings are far and wide, and the so-called centre is somewhat mundane. Villagers gather here to sell their artisanal produce and handmade goods, and it was rather pleasing to see how happy they were while doing so.

Finding out I’d be visiting a museum got me intrigued until I found out it was the Spam Museum. My first thoughts were, what in the world is spam, and why does it deserve its own museum? In a nutshell, ‘spam’ is simply canned ham.

To me, it’s unappetizing, but to the Americans, it’s apparently a big deal. Upon walking into the museum, we were welcomed by the Spam mascot: a life-size can with legs, arms, and ahead.

After viewing their products, we walked out twenty minutes later sporting a stick-on Spam tattoo and comparing the experience to a regular visit to the supermarket.

I can’t say that I felt educated and cultured after such a museum trip, but not many can say they’ve visited the Spam Museum, so I guess that’s something.

I don’t think Minnesota has a lot to boast about. The Spam Museum was odd enough, but Minnesota is also weirdly proud of the corn brand Green Giant.

So much so, there’s a Jolly Green Giant statue towering at over 15m. He stands there, with legs apart and hands on hips, reminding us to eat our corn whilst making us wonder if this statue is really necessary.

Rome has the Colosseum and London has the Tower Bridge. South Dakota, on the other hand, has the Corn Palace. Although not your everyday site, the world’s only Corn Palace is pretty impressive.

Its exterior is covered in none other than cobs of corn, grains, and grass to create different kinds of mosaics and murals. I stood there fascinated at this massive corn art, eating my freshly made popcorn, and questioning some people’s time management. 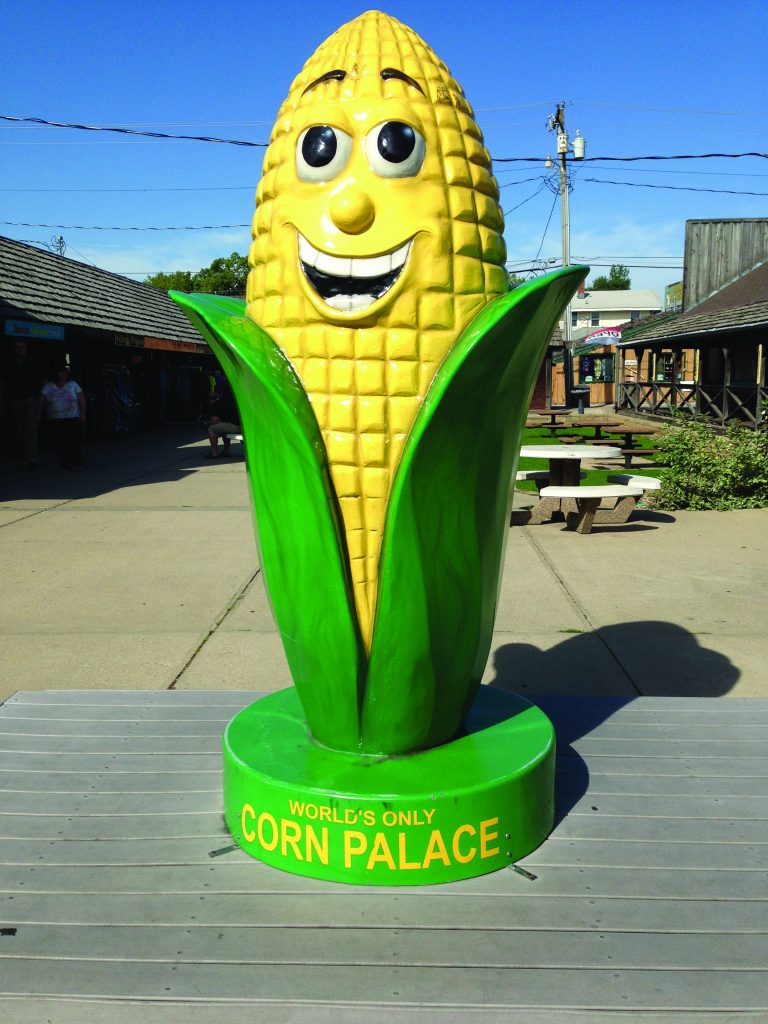 This was our first visit to a national park, and I had pretty high expectations. The park has its name for a reason; it really is ‘bad land’. Not much of a hiker myself, I was baffled as our guide thought it was a smart idea to drop us off and hit us with one of his nonchalant statements, “You get out here and hike the trail. I’ll see you on the other side.” We took off on a mystery hike trail, amidst a series of “Beware – rattlesnakes” warning signs.

This didn’t look too promising. A few kilometres into the hike, we looked back and noticed a thunderstorm was chasing us as bolts of lightning broke through the thick grey clouds. We picked up the pace and to no avail the storm eventually caught up with us. Washed with heavy rain, we made our way to end of the trail breathlessly, and met up with our very aloof, very dry guide inside the van.

A few years later and I still can’t understand how Wall Drug is such a huge tourist attraction. Greeted with a plaque that states ‘WALLcome to Wall Drug!’ my guess is it’s not popular for its humour. Initially, Wall Drug was a Drug Store, i.e. Pharmacy, which now turned into a mini-mall. The best thing about visiting Wall Drug was sitting on a huge Jackalope statue.

Not sure what a Jackalope is? It’s a mythical animal, which is basically a cross between a Jack Rabbit and an Antelope. Jack & Antelope – Jackalope… get it?

Calling all lovers of the colour pink, this is your mecca. Madonna Inn serves both as an inn as well as a restaurant. It’s the kind of place where you walk in and stare in awe from disbelief. How can a place possibly be so pink? The carpets, the walls, the booths, the doors, even the ceilings were pink! This was overabundance on a whole other level. My eyes hurt as we sat down at the pink bar on a pink stool, eating pink ice cream topped with pink sugar crystals.

In Malta, some houses are decorated with stone lions or dolphins on the outside of the house. In Beverly Hills, one house took it to another level. As we walked around admiring the beautiful houses, I noticed a giraffe on someone’s front lawn.

I squinted and moved closer to see if my mind was playing tricks on me. Nope. It was indeed a giraffe – a life-size statue, accompanied by other realistic statues of wild animals, including a peacock, two baby giraffes, a zebra, a leopard, tiger cubs, a lion, a gorilla and an elephant. How’s that for a theft deterrent system? 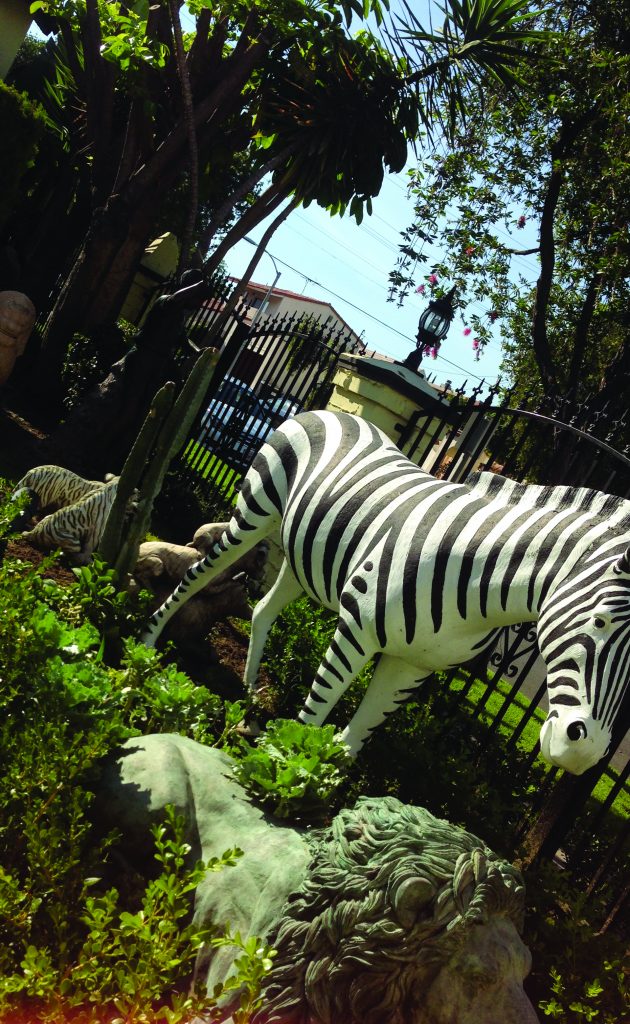 We arrived at the Grand Canyon rim and our guide decided it would be a genius idea to walk blindfolded towards the edge. Holding onto each other’s shoulders, we shuffled forwards like a bunch of kindergarteners. Safely arriving in position, we removed our blindfolds on the count of three.

My most previous vision was the back of my friend’s head before being blindfolded, and suddenly I’ve uncovered my eyes to the endless, amazing Canyon. Looking ahead gave me chills, the feeling surreal. The view was breathtaking and the feeling overwhelming, however, in hindsight, being blindfolded on the edge of the canyon had a huge margin of risk.

Roswell is proud of what it claims to have been a UFO sighting in 1947. This museum is all about that incident, and of course, the conspiracy of how the US government tried to cover up the sighting. The museum involved newspaper cuttings and photographic evidence of the sighting, and exhibits show incubated aliens as well as aliens undergoing an autopsy. That’s $5 I’m never getting back.

The heading pretty sums up this experience. The owner of this house decided to use beer cans on the exterior of his house. It is said that 50,000 beer cans were used for this project. Beer can garlands also hang from the roof. I can only imagine the noise on a windy day.

Upon arrival in Louisiana, we headed to a swamp tour. We spotted racoons and turtles, but the main attraction here is the alligators. The guide placed a hot dog on a stick and extended it outwards of the boat. In the blink of an eye, an alligator shot up in a vertical leap to snap off the sausage. I was impressed, but little did I know that later that evening, I would be served alligator on a stick. I passed on this and opted for a vegetarian dish without regret.

Reaching NYC at the end of a 6-week trip was like a breath of fresh air. I thought I was done with the weird stuff and I could just enjoy modern, city-living. As I was in Times Square, I noticed a herd of zombies. They attracted quite a crowd, so I gathered they weren’t the brain-eating kind of zombies but were simply promoting the season premiere of ‘The Walking Dead’.

The final quirk of this trip was most likely my most frightening. As a friend and I were walking towards the Brooklyn Bridge, deep in conversation, I suddenly noticed that she, in some sort of disappearing act, dashed off in a ‘Usain Bolt’ type of sprint into the opposite direction. Confused, I looked around to try to figure out what sort of game she was playing until I noticed a man casually towing a luggage whilst carrying a 6-foot snake around his neck. I also ran off to create some distance and watched him. Satisfied, he stopped, opened the luggage, and zipped the snake up in there, walking off in the most unconcerned of ways. I thought I dodged a bullet when there were no snake sightings on the Louisiana swamp tour, and I had to come face-to-face with one in the city.

Behind the glitz and glam of the fashion industry, photographer and visual creator John ...