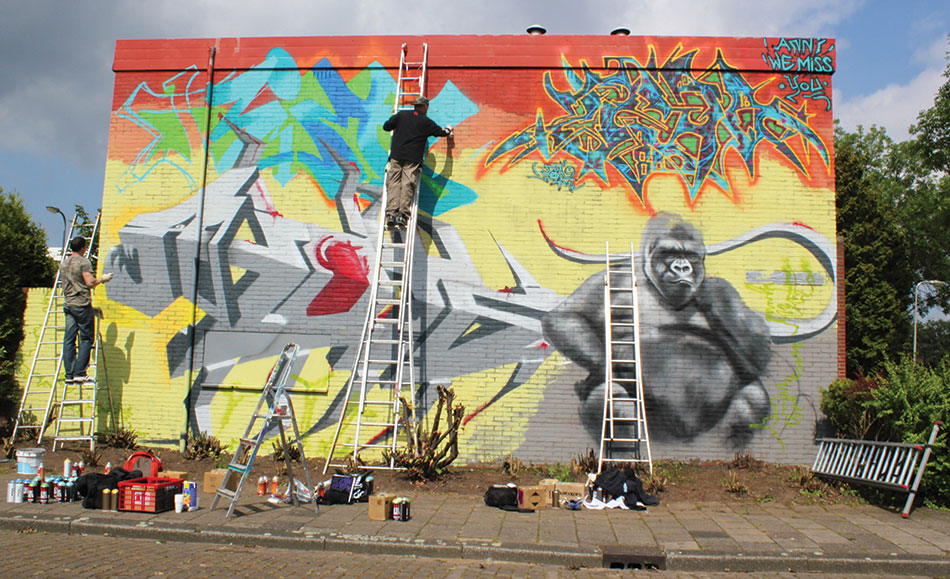 Tell us a little bit about yourself and your journey to where you are today?

My journey in the world of art started off through graffiti back in the 1990s. I spent my days back then skateboarding and doing graffiti in the streets – mainly the Sliema/Tigné area. Tigné was our playground because it was full of abandoned and broken down spots falling down places.

Good times!! Graffiti and skateboarding weren’t fashionable like they are today. The 1980’s craze had totally died out, apart from a few die-hards. We did it purely for the love of it, to entertain ourselves.

I kept doing graffiti and started painting on canvas as well. I took part in my first exhibition at St James Cavalier in 2003. After that it was a constant flow of exhibitions and new art projects. Graffiti and canvas works have taken me to quite a few places around the world, especially after the internet boom. The world became a million times smaller: your artwork can travel the globe with just one click.

At what age did your passion for art start?

I guess it started whilst I was at school in the 90s, drawing in my files and on my school benches. I would transfer some of them on to walls in the streets and use other sketches to create intricate collages made of tiny drawings.

What is your inspiration for your pieces?

Every piece has its own inspirational elements but I definitely feel compelled to share my critical view of society.

Where did the name Twitch come from?

The word first came to my attention from a scratching sample I own. I decided to stick to it due to a nervous twitch I had as a kid which would reappear in times of severe stress.

Do you think street art should only stay on the streets or should everyone have a chance to own it?

Street art is art found in the street but everyone has the right to own a piece done by a street artist.

How do you feel about street art becoming more commercial and works selling in top auction houses for hundreds or thousands of pounds?

What paints and materials do you prefer to use?

It depends on the artwork and the result I want to achieve. I use a number of media, mainly aerosol for outdoor work and a mix of aerosol and brush for indoor work.

Do you think stencil work is cheating or just a quicker way to create pieces?

I think stencil work is great if you want to depict a detailed, realistic image in a very short time or would like to copy the image numerous times. You don’t need a vast background in art to create a stencil. I actually use the stencil technique during workshops I give to hold for school kids who have a limited background in art.

What is the process of creating a large piece/mural?

It depends on the artist’s approach. A wall space is found, chosen and a subject that fits in to the area is depicted. Murals involve more brain-storming and more focus on structure.

Where’s the best place you have worked?

I have worked in many places and every place has its pros and cons. I’m always happy to work in the Netherlands due to the open-mindedness of the people on various subjects that might seem to be taboo in other parts of Europe.

If you could choose to work with anyone, who would it be?

It would be great to work with Marcel Duchamp, if he were still alive.

How do the Maltese authorities feel about street art and what sort of relationship do you have with them?

It’s great. In Malta, we’re quite lucky not to have had the crazy ‘bombing’ and ‘tagging’ vandal craze that we can witness in other parts of Europe. This has put a dark light on the mention of graffiti in some areas, especially the Scandinavian countries and Germany and Spain, where the police have their own special forces to stop graffiti. Here in Malta it has always been contained and people actually love to see works of art in the street. This makes it much easier for us to get projects related to graffiti and murals.

Do you see the street art scene in Malta growing?

What is the longest a piece has taken you to do?

The first large-scale mural we did in Malta, in San Gwann, took quite a while. Before starting the mural we had to plaster the 56 by six-metre wall ourselves due to a lack of funding and could only work for a few hours a day during the summer months. Every time we wanted to view the wall, we had to cross the busy Bellavista Road. It took us two-and-a-half months to finish.

Do you prefer to work alone?

I love both working alone and collaborating with other artists.

If you could paint anywhere, where and what would it be?

It would be awesome to paint a huge space shuttle that regularly orbits the earth.

What is the key to being a good street artist?

Can anyone be a street artist?

Yeah! Anyone with the desire and determination to do so.

What projects and plans do you have in the pipeline?

I’ve been commissioned to paint a five-storey building in the Netherlands which will happen around next March and I’m planning my solo exhibition which will hopefully be ready by May.

Where do you see yourself in 10 years’ time?

Hopefully still doing what I’ve been doing for the last 10.

Have you seen Exit through the gift shop?

Yeah, such a great movie! It’s funny, because I remember seeing Mr Brainwash’s advert in a graffiti magazine and asking myself who on earth this guy was. I had never heard of this guy and was baffled to see Banksy advertise his exhibition.

I have loads of respect for both. Blek Le rat is one of the pioneers of street art, before the advent of Photoshop. He was making his own stencils from scratch. Banksy is more politically charged and his works are very witty. I love the stuff he does. His rats do resemble Blek le rat’s quite a lot, though.

Watching so-called artists getting credit for copying other artists.

The beauty and twist it gives to a normally grey and boring urban environment.