One of the most technically proficient and gifted commercial pin-up artists of the 20th century, Gil Elvgren enjoyed a prolific professional career which began in the mid 1930s and lasted more than forty years, during which time he established himself as a hard working perfectionist who created luminous portraits of the mischievous girl next door 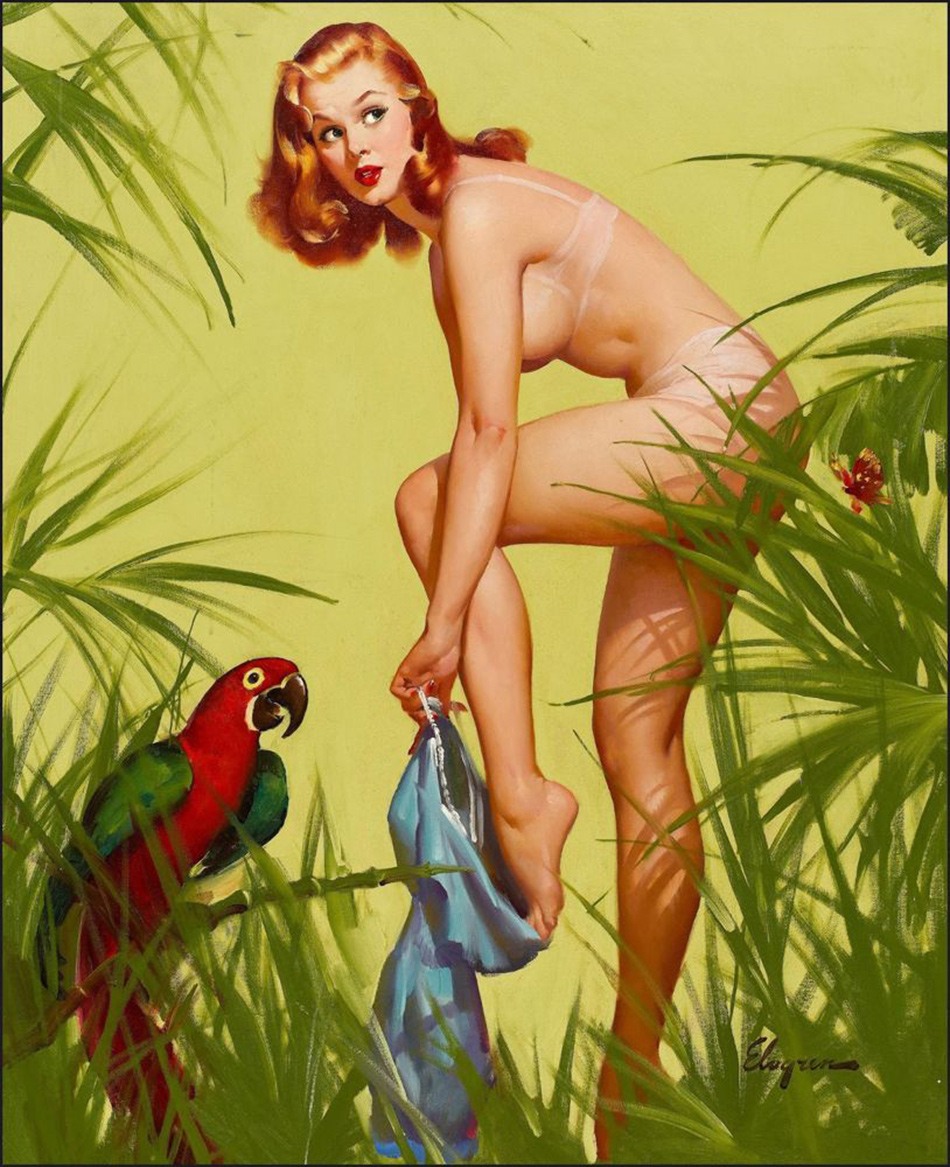 Long before Gil Elvgren attended his first art class in 1933, he had been impressed by the early ‘pretty girl’ illustrators, while their glamour and romance successors also left their mark on the young artist. Early on, the artist tore out the pages of countless magazines of images that struck him, which later became his ritual.

In 1937, Gil began painting calendar pin-ups for Louis F. Dow, one of America’s leading publishing companies, during which time he created about 60 works. Many of his pin-ups were reproduced as nose art on military aircraft during World War II. Around 1944, Gil was approached by Brown and Bigelow, a firm that still dominates the field in producing calendars and advertising specialties. He then worked with the company for the next 30 years.

Elvgren’s ability to capture the spirit and sensuality of American feminine beauty was unparalleled. His pin-ups were pictures of real girls in real, everyday situations. 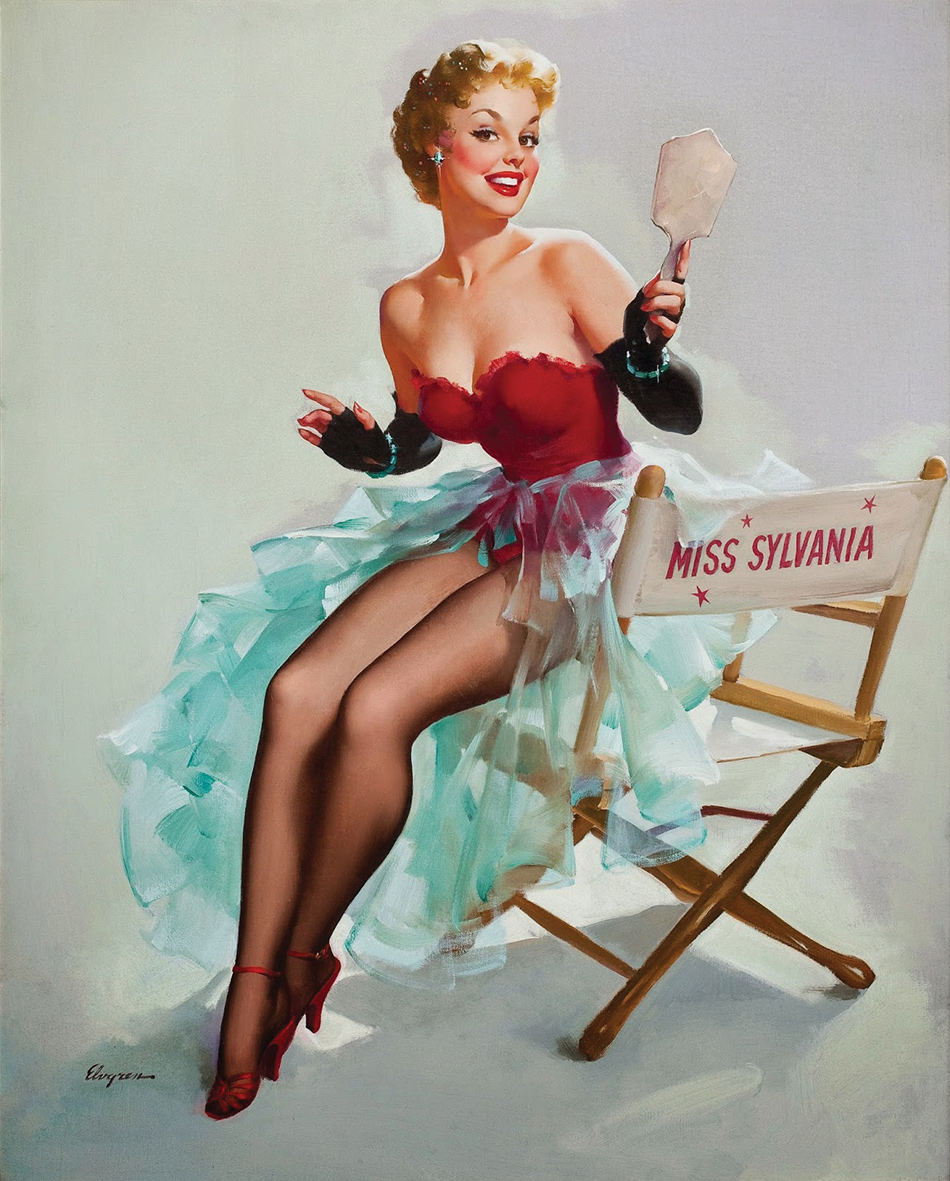 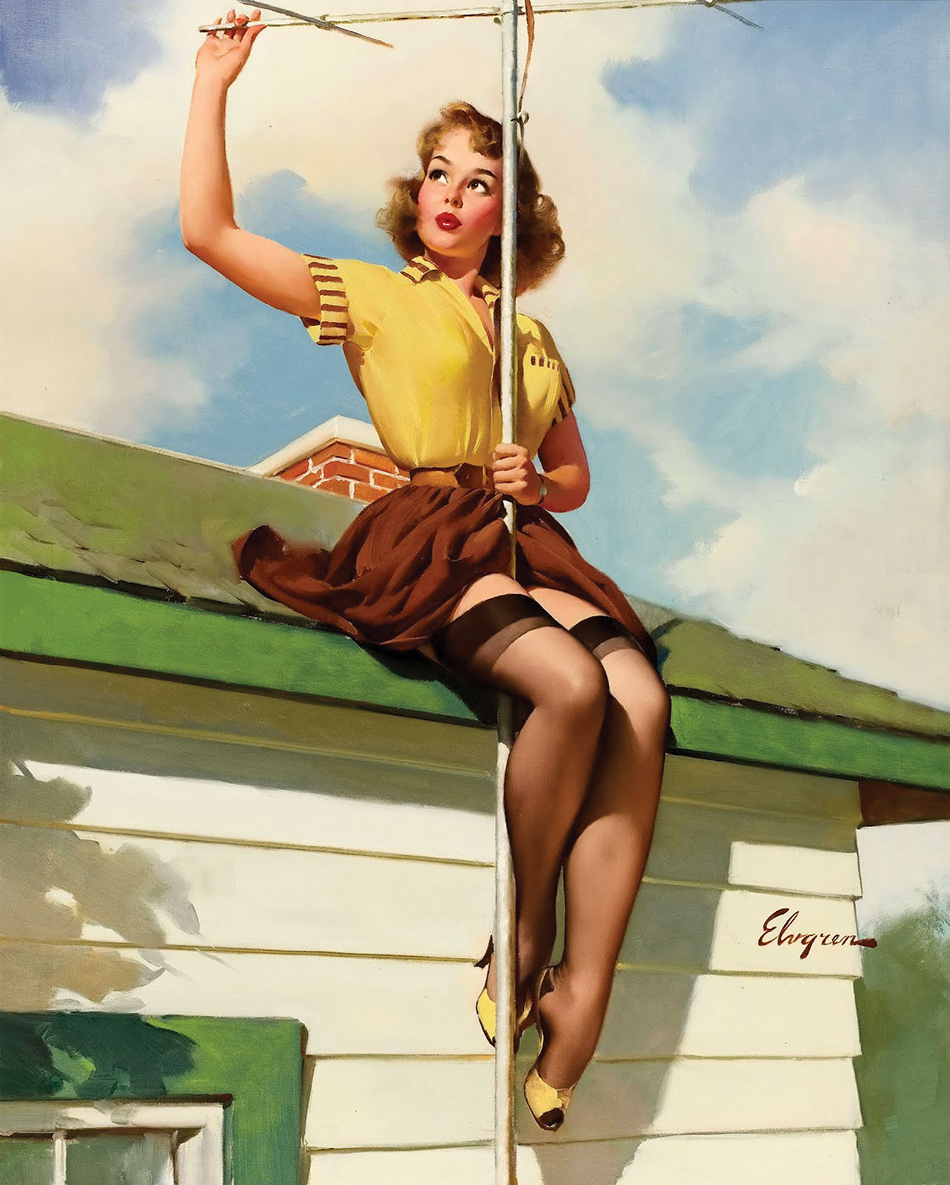 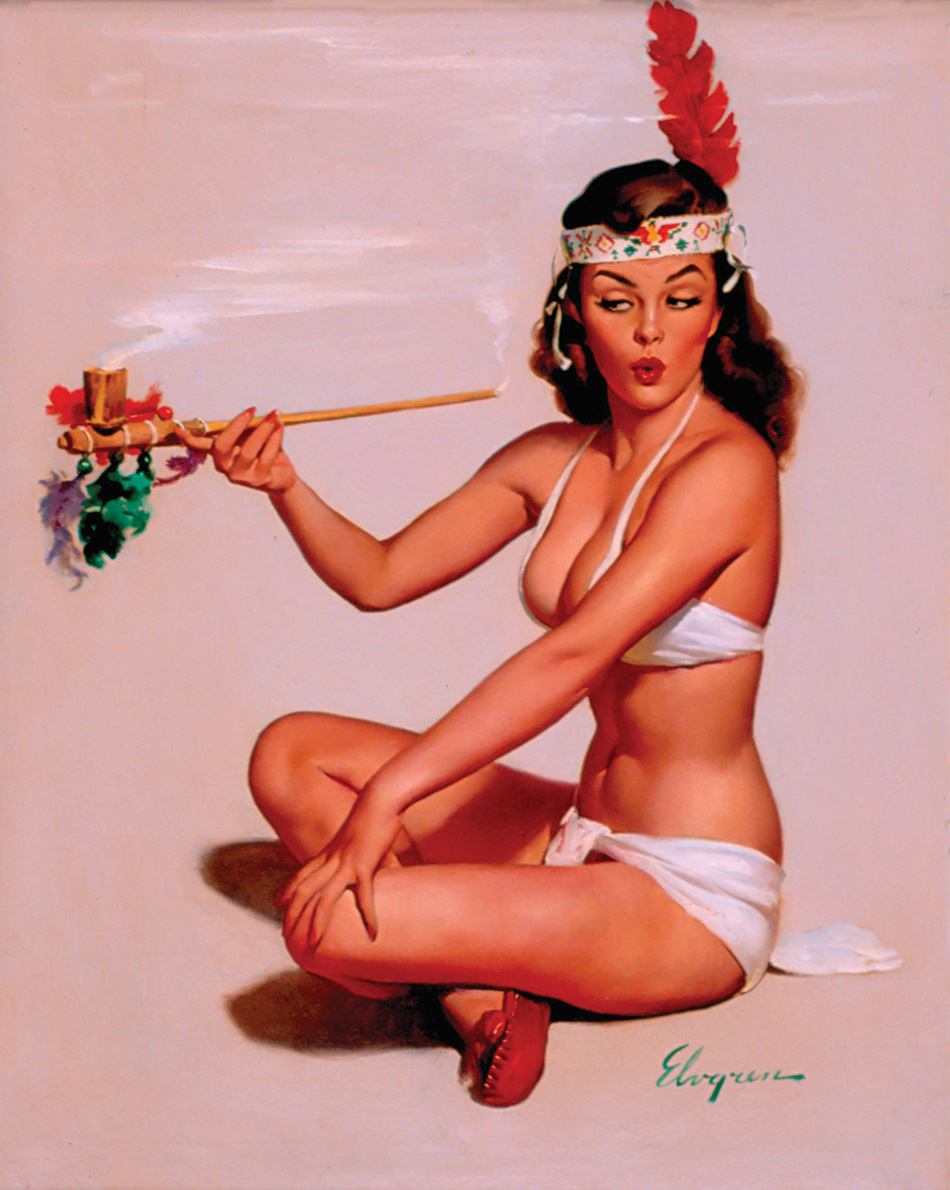 When the artist was once asked what feature of a model most interested him, he replied, “A gal with highly mobile facial features capable of a wide range of expressions is the real jewel. The face is the personality.” He felt that the model was the all-important factor in making a painting strong. He preferred young models (15 to 20 years old) just starting their careers, and valued models who were eager and genuinely interested in the project, though he said that they were very hard to find.

His techniques involved distinctive touches that he added to every painting; building up the bust, lengthening the legs, pinching in the waist and giving the body more hyper-defined curves, working over the facial features and expression, adding just a little more of a tip and tilt to the nose, making the mouth fuller, and the eyes a bit larger. “I like to create the feeling that, underneath all the surface charms, there is a delicious warmth of mischief behind the model’s eyes.”

Elvgren Girls had personality and zest; they were lively, friendly beauties brimming with enthusiasm. They were sweet-faced, but also generously endowed by nature. They could easily kindle a twinkle in anyone’s eye and often had one in their own. For more than thirty years, from the 1940s to the 1960s, they epitomised the American Girl. 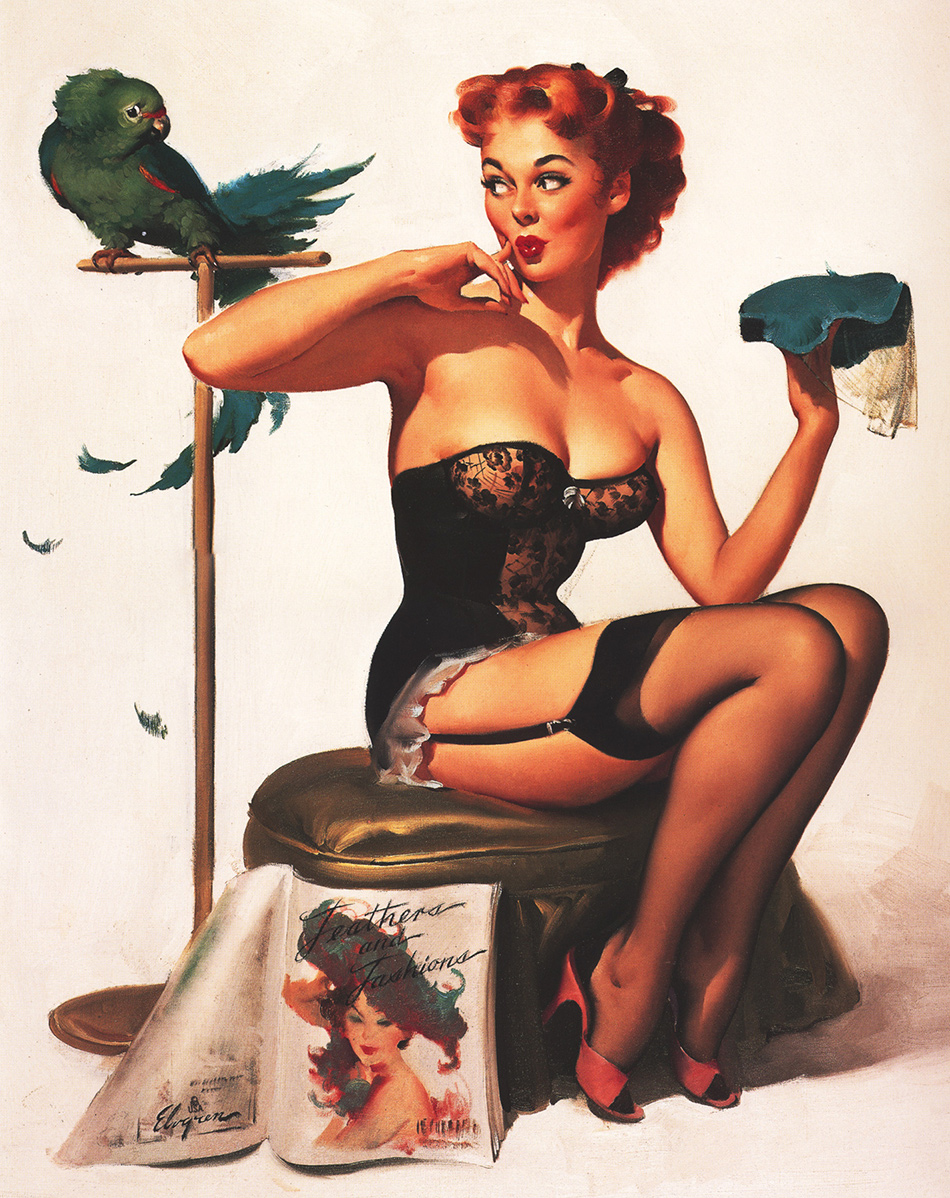 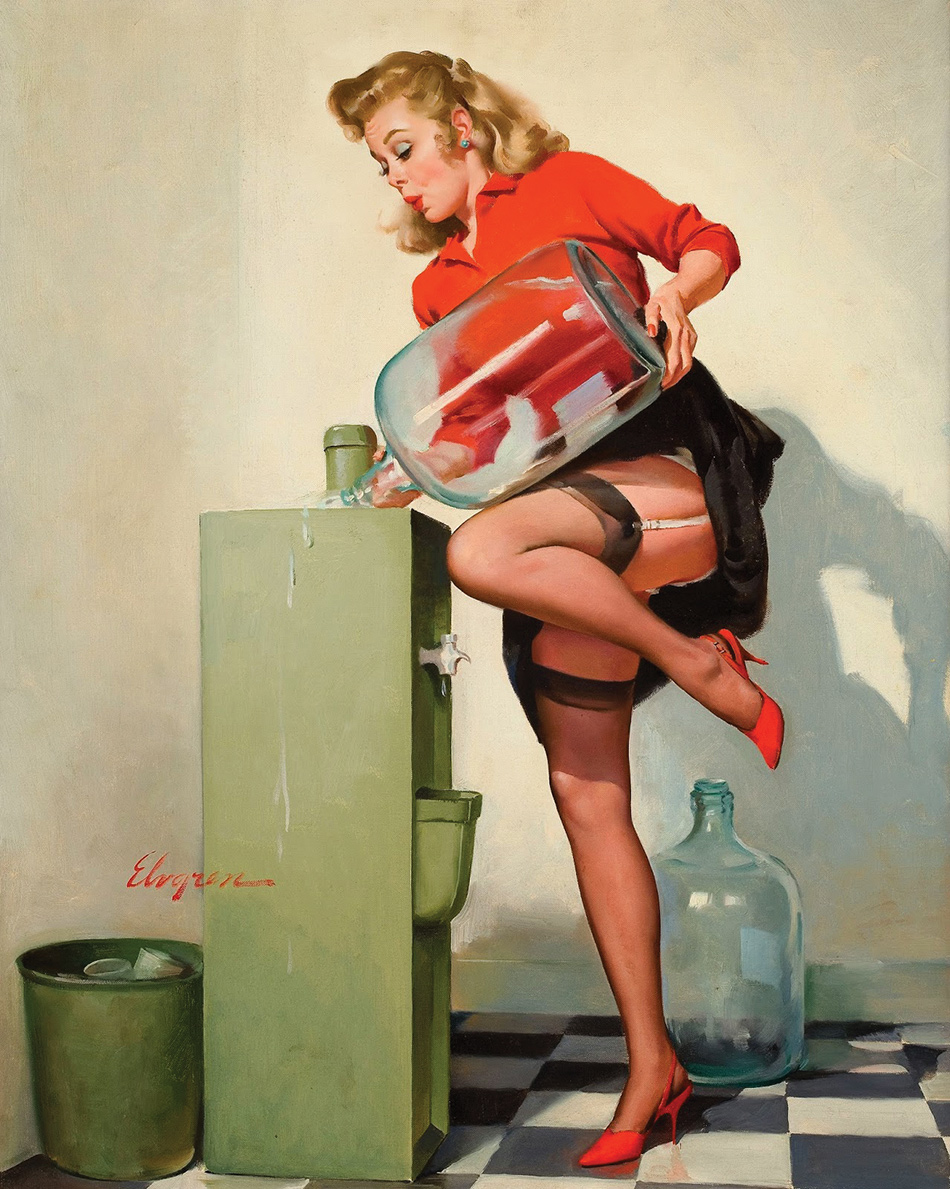 The artist’s Coca-Cola subjects portrayed the American dream of a secure, comfortable lifestyle, but his well-known illustrations for magazine stories often captured timeless scenes that reflected the hopes, fears and joys of their readers. These publishing assignments were commissioned during the 1940sand 1950s by a host of mainstream American magazines, including McCall’s, Cosmopolitan, Good Housekeeping and Woman’s Home Companion.

Elvgren was also a notable professional photographer, but his amazing energy and talent did not stop here, since he was also a revered teacher of students who often went on to become famous artists in their own right.

Although most of his work was created for commercial use, it has been increasingly recognised as “real” art by many private collectors, dealers, galleries and museums, which has made him recognised as a classical American illustrator whose career encompassed many different fields of commercial art. 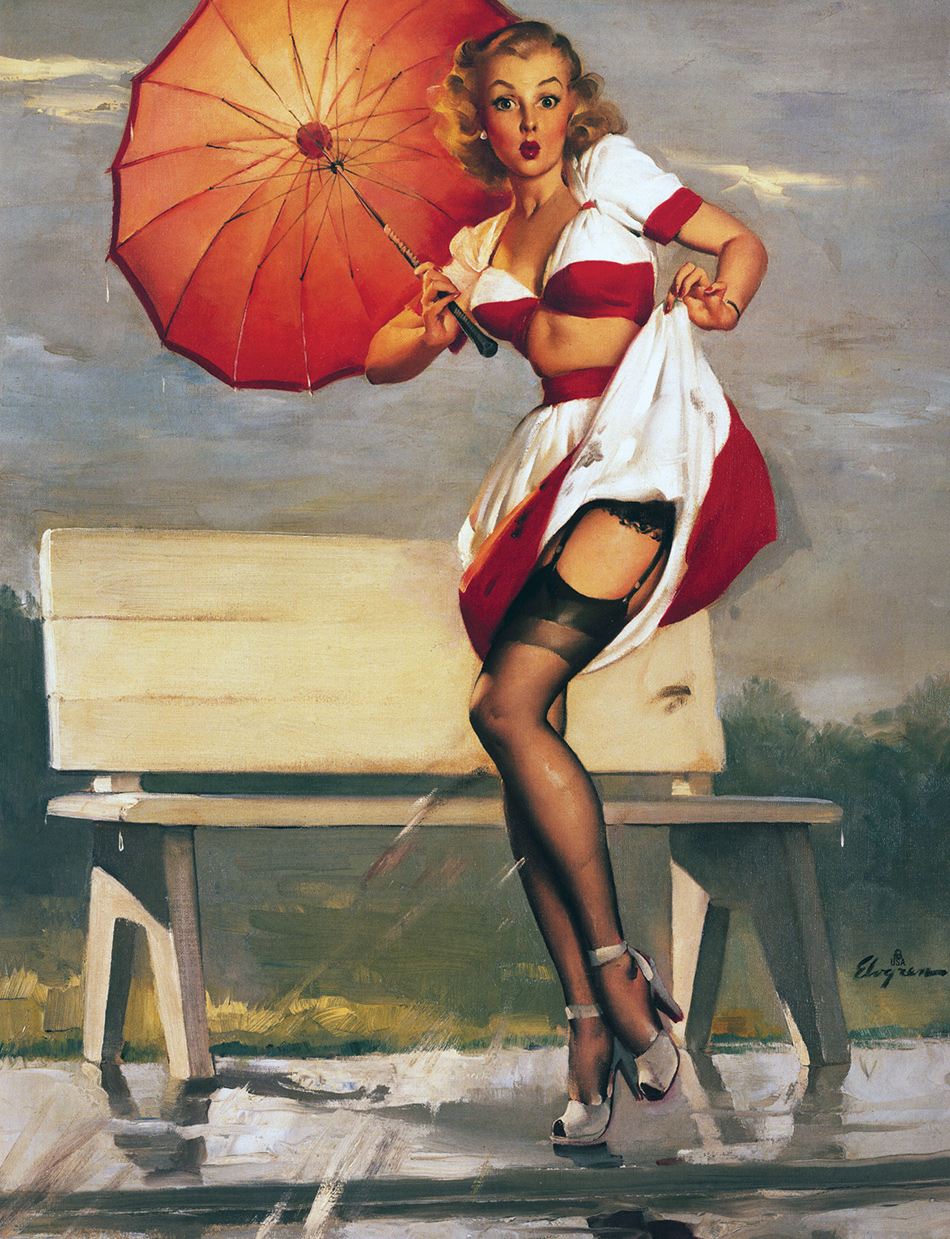 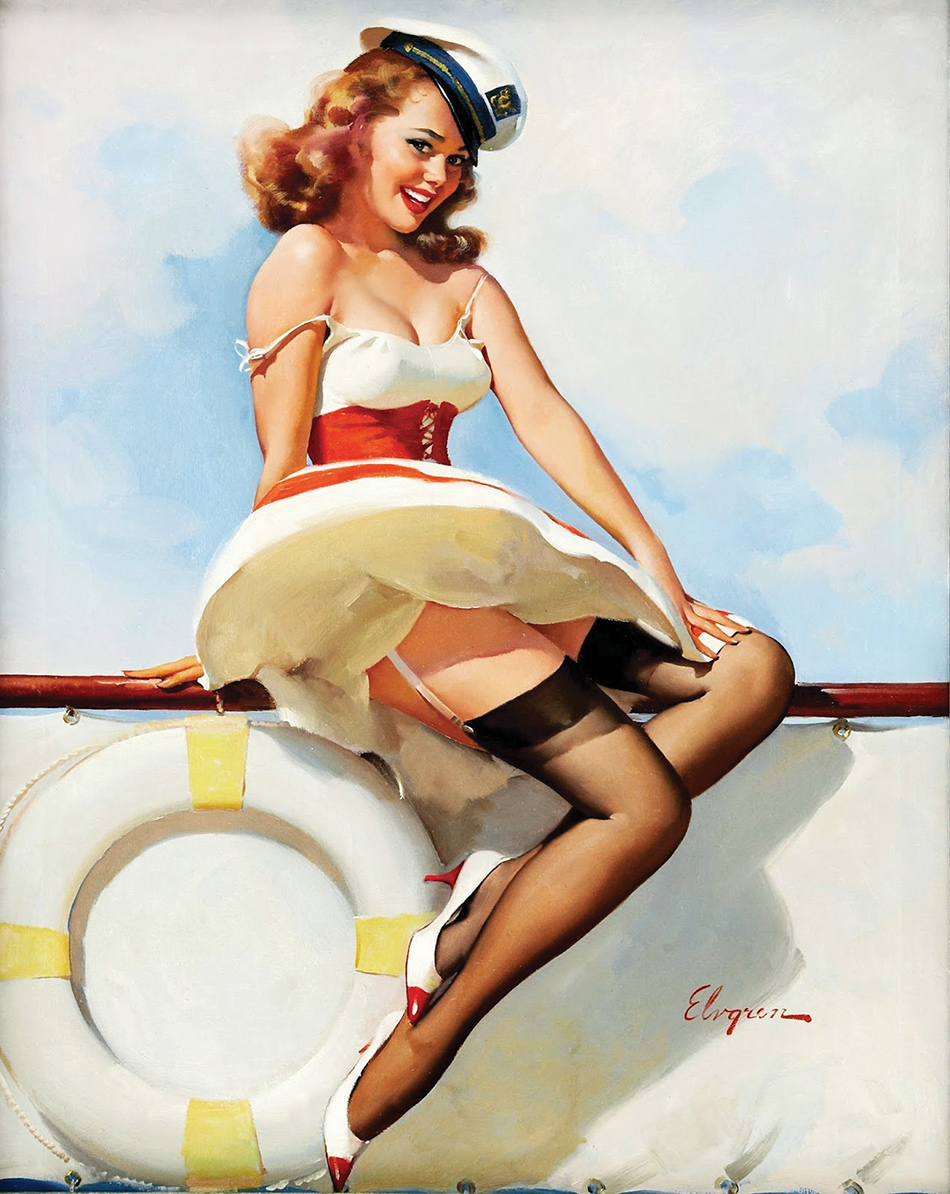 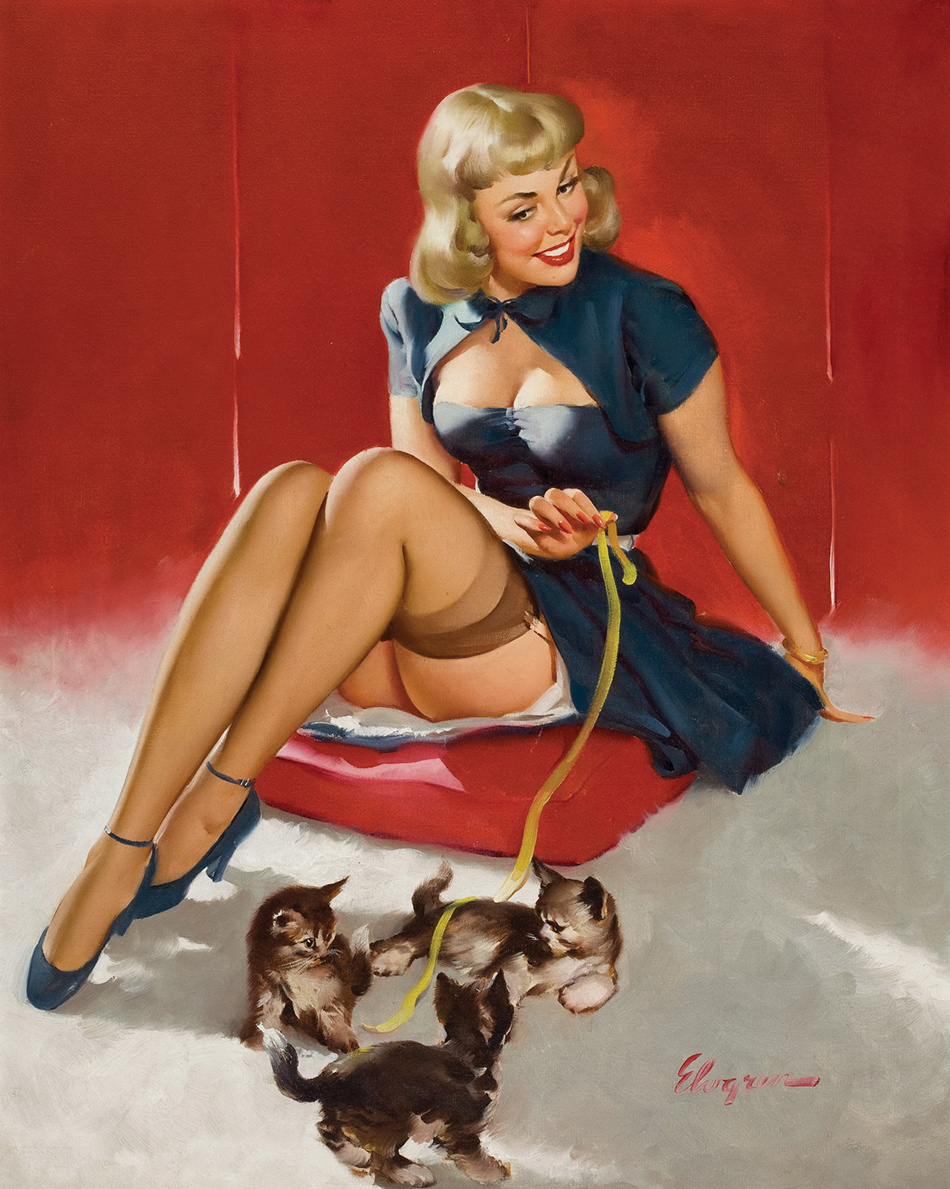 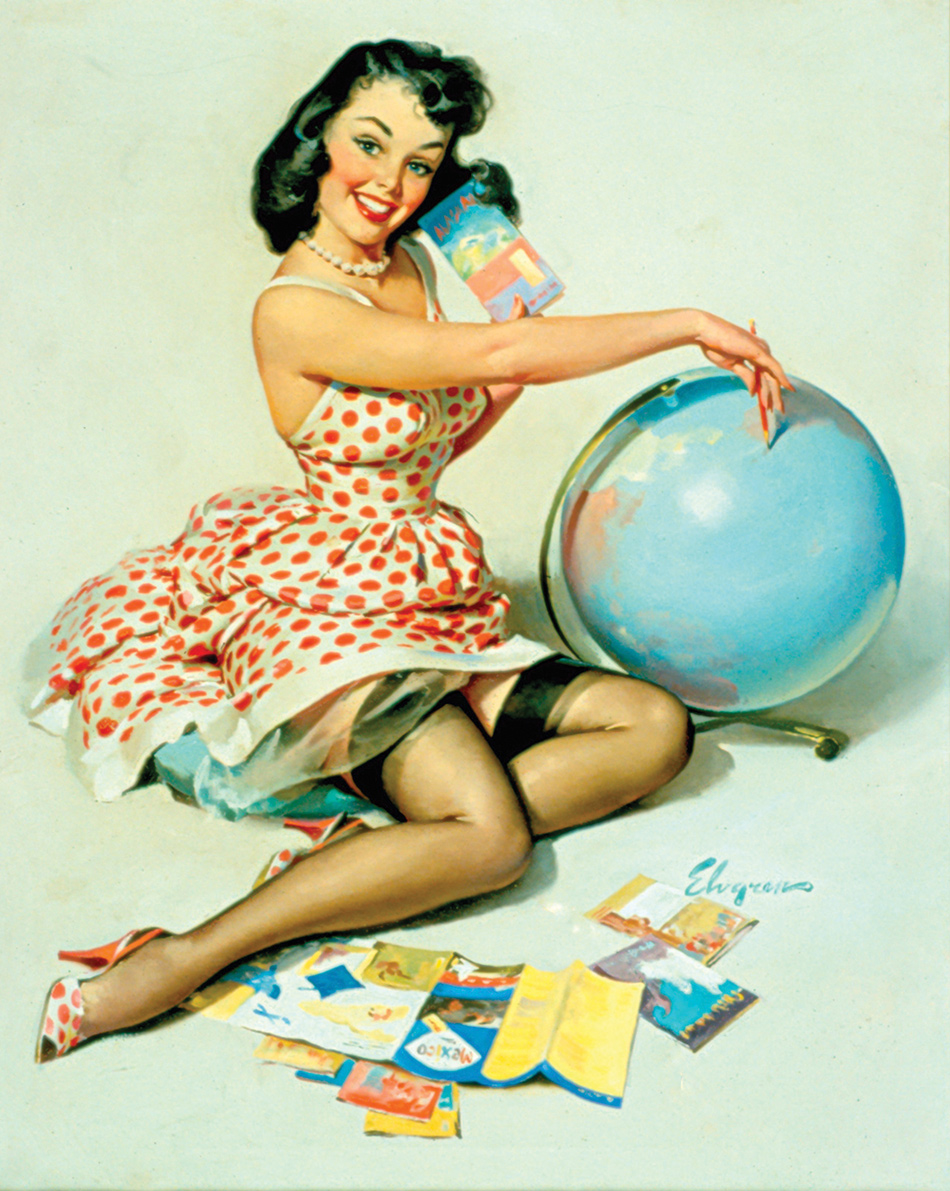 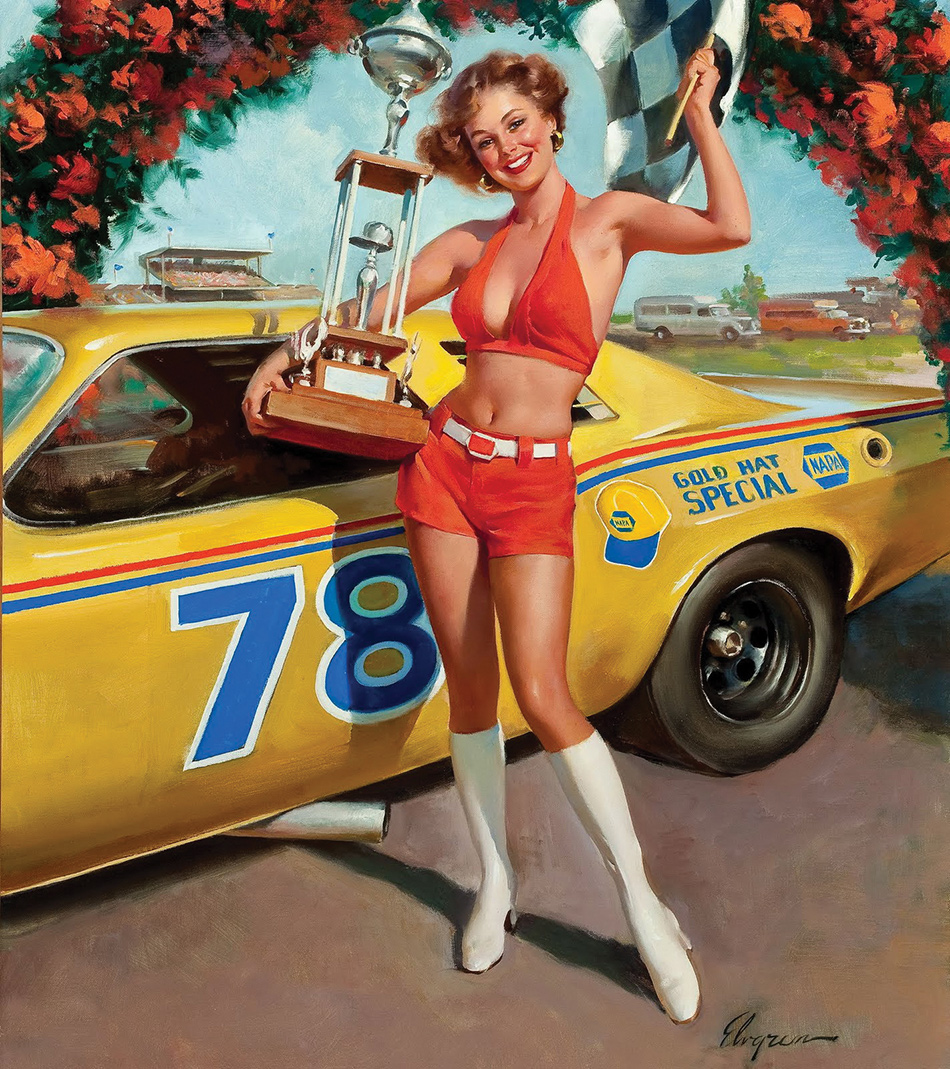 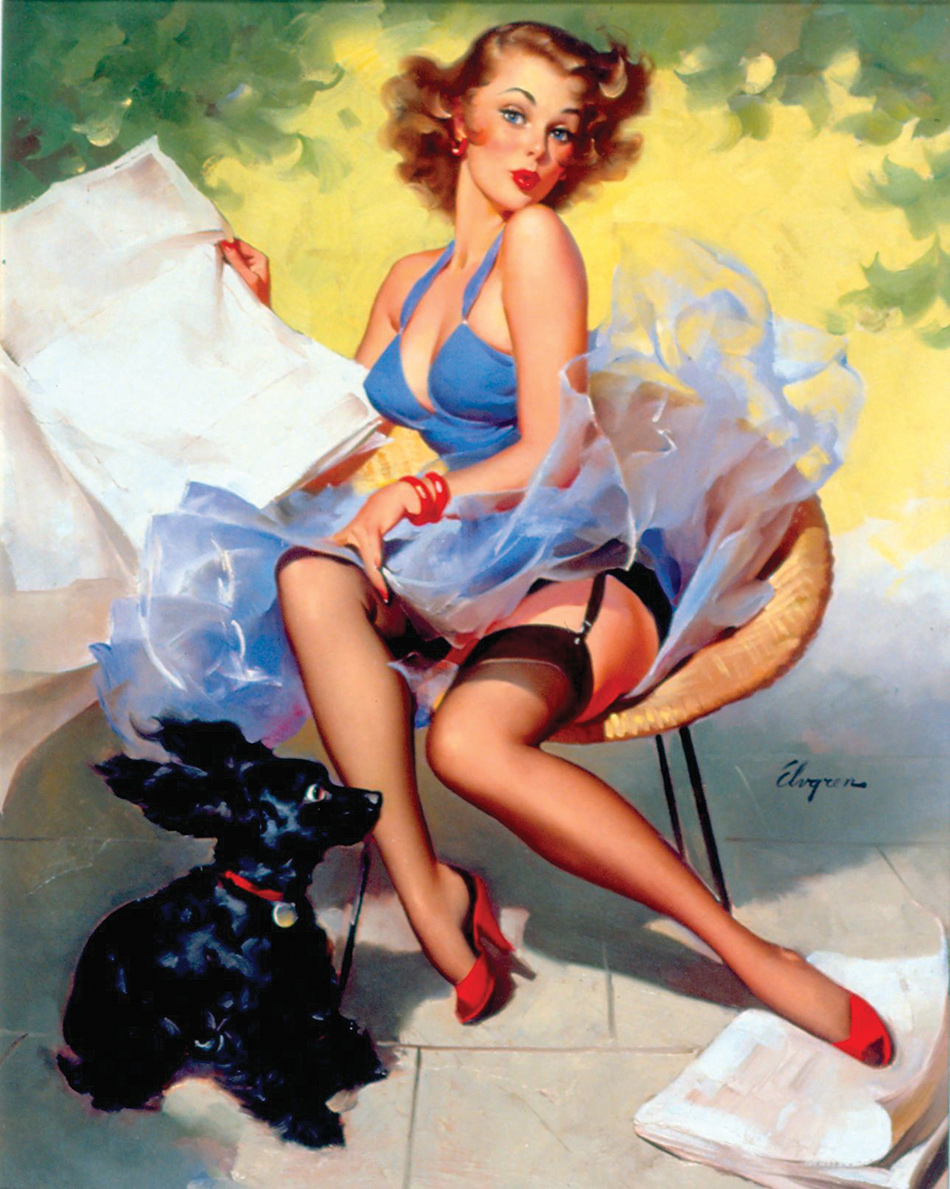