Visitors to st james cavalier in november couldn’t have failed to have been intrigued by a giant question mark installation suspended at the top of the main stairway... 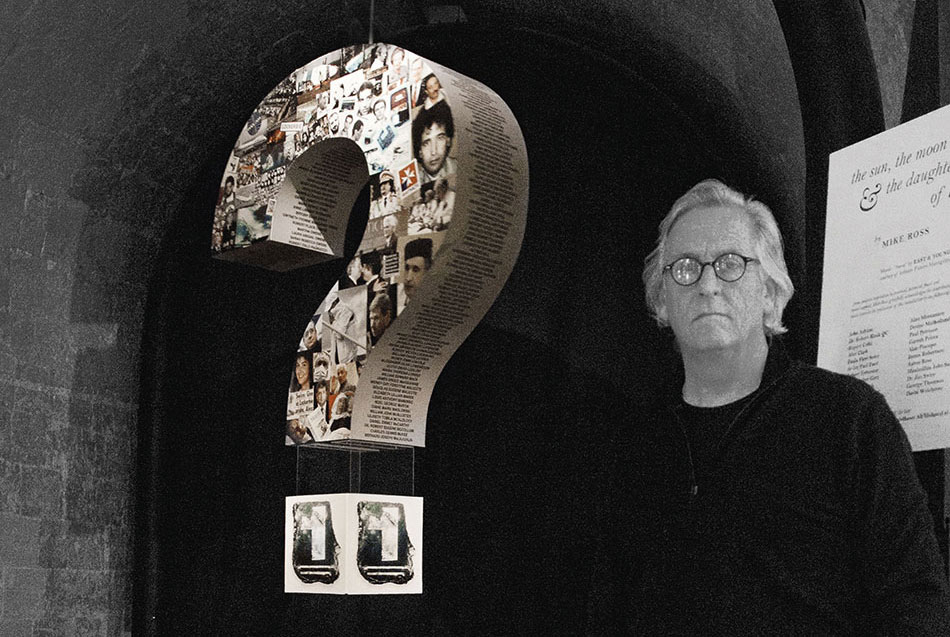 ‘The Sun, the Moon and the Daughter of Time’ is an installation by Mike Ross, created for the play ‘The Lockerbie Bomber, written by Kenneth N. Ross and directed by Herman Grech, which ran for three weekends with a cast that included some of Malta’s finest actors.

How did it come about?

I’d been thinking for some time about producing something related to Lockerbie. I’ve been following the case for many years and it has become obvious that Megrahi was set up and that the whole thing has been a scandalous miscarriage of justice – and if Megrahi didn’t do it, then who did? If Megrahi was innocent, then the link with Malta evaporates. I was already looking for a way in which I might contribute to the cause – uncovering the truth about what really happened, or at the very least raising awareness about the issues. Recently, I’ve been wanting more and more to get back into areas of art that I’d left behind – painting, drawing, sculpture – but still using my photographic and design skills in some way. Installation art hadn’t really crossed my mind but it turned out to be the perfect medium – determined, as it often is, by the space in which it is placed.

When I heard that The Lockerbie Bomber was to be staged in Malta, I contacted Herman Grech, the director, showed him some of my work and said: “Here’s what I do – how can you use me?” Herman and the producers generously gave me carte blanche and I took on the design of the poster, adverts, programme and the photographing of rehearsals, and the result was that I came up with the concept of “The big ?” – a visual timeline montage of pertinent images in the shape of a question mark with the crucial piece of forensic evidence as the final dot.

The Lockerbie issue is a tangled mass of unanswered questions.

Did you have a particular space in mind in which to hang the piece as you developed the idea?

When St James Cavalier offered to support the production with some display space, that’s when the idea of making “The big ?” into a suspended rotating three-dimensional installation with light and sound was conceived. The original space that had inspired it was the atrium with its glass lift and footbridge, underneath which it would hang – all five metres of it – viewable from above, below and, with the benefit of a staircase on either side, from practically every possible angle. A circular platform on the floor below would rotate in the opposite direction and on the circular walls, with their indented sections almost ready-made, I wanted to put a huge and telling quotation.

In time it became apparent that the original space would present too many logistical hurdles if I was to meet the deadline, and so the decision was made to adapt it to a different space – at the top of the stairs directly outside the entrance to the theatre. The quotation was probably more effectively placed on the edge of the rotating turntable instead of on the walls.

Describe what “The Big ?” consists of.

On each face of the question mark is a visual timeline of the story, beginning with the shooting down in July 1988 by an American warship, the USS Vincennes, of an Iranian airbus, killing 290 passengers, pilgrims on their way to Mecca, many of them women and children. The original finger of suspicion pointed very early on to the Lockerbie atrocity being a revenge attack, carried out by a Syrian-based terrorist group with close ties to Iran.

There are images of the Iranian victims, and the subsequent devastation at Lockerbie.

The dramatis personae feature throughout. And then Libya enters the frame: Megrahi, his co-accused Fhimah and, of course, Muammar Ghaddafi. There’s the trial at Camp Zeist in Holland, the first appeal and then Megrahi’s release on compassionate grounds and his return to Tripoli. The timeline ends with the deaths of both Ghaddafi and Megrahi but it is by no means the end of the story.

Although not everything can always be visible, the name of every single one of the 270 Lockerbie victims is there on the edges of the question mark and I made sure that no family members were separated from each other.

Going through the list of victims, it was very sobering to realise just how many members of the same families died when Pan Am 103 exploded over Lockerbie.

The final point, at the bottom of the question mark, is a cube on each side of which is featured a blow-up of the minute (10 x 9mm) fragment of circuit board, the single most crucial piece of forensic evidence in the Crown’s case against Abdelbaset al-Megrahi. It was allegedly embedded in a piece of blast-damaged Maltese shirt, which was found 35 km east of Lockerbie in a field. Claimed to be part of an MST-13 timer, of which 20 were known to have been supplied to Libya, it has since been categorically proven that the metallurgical constituents of the fragment do not match those supplied to Libya, thereby destroying the Crown’s case. This is just a tiny element of the story – but one of monumental importance.

What is the significance of the quotation that you used on the edge of the turntable?

“Your government and our government know exactly what happened, but they’re never going to tell”. These words were allegedly said by a US Senator in an aside to the father of one of the victims, as he was leaving a meeting of the President’s Commission on Aviation Security and Terrorism with UK family members at the US embassy in London in 1990.

Can you explain the meaning of the title?

I had been thinking about a title throughout the process – it had to be something connected with “truth”. The truth about what really happened over Lockerbie has still not come to light after all these years. In fact, it has been deliberately concealed by successive US and UK governments for nearly 25 years – perhaps some other governments as well.

I played around with a saying attributed to Buddha: “Three things cannot stay long hidden – the sun, the moon and the truth”. However, as the truth is still hidden, or – more to the point, covered up – I didn’t want to use the actual word itself, and so used part of another saying, “(truth is) the daughter of time” by Francis Bacon. The result was: “The sun, the moon and the daughter of time” which has the meaning, partially concealed, that I wanted to get across.

How did you come to choose the haunting music that accompanies the installation?

I had this track, Snow by Dutch electronic DJ duo East & Young, in mind from the word go. It’s atmospheric and has the dignity I wanted without being gloomy. The speed of the rotations was based particularly on what worked best with the music.

You’re known as a designer and photographer – have you created any previous installations and do you have any others planned?

This is the first time I’ve worked in three dimensions on such a scale, and in conjunction with movement and sound. I would love to do more work in this medium, especially if there’s the opportunity to make a statement of my beliefs. I am certainly planning future work which is of a much more personal nature, work with meaning.

In the meantime, I’d love to think that the question mark concept and the installation, even if not this actual physical Maltese construction, will have a life beyond the production of the play in Malta. I’m sure there will be future productions in other countries, and opportunities – theatrical or otherwise – to use it in connection with raising awareness about the Lockerbie atrocity, hopefully with the content of the montages being updated with appropriate new images as the truth eventually unfolds. Perhaps I can regain the original scale I had in mind, and ideally add projections of moving images, depending on the location. I’d like to see it as a constantly evolving piece with the truth as the final outcome.