Reduction and perfection – these are the aims of NORM Architects: a practice founded in Copenhagen in 2008... 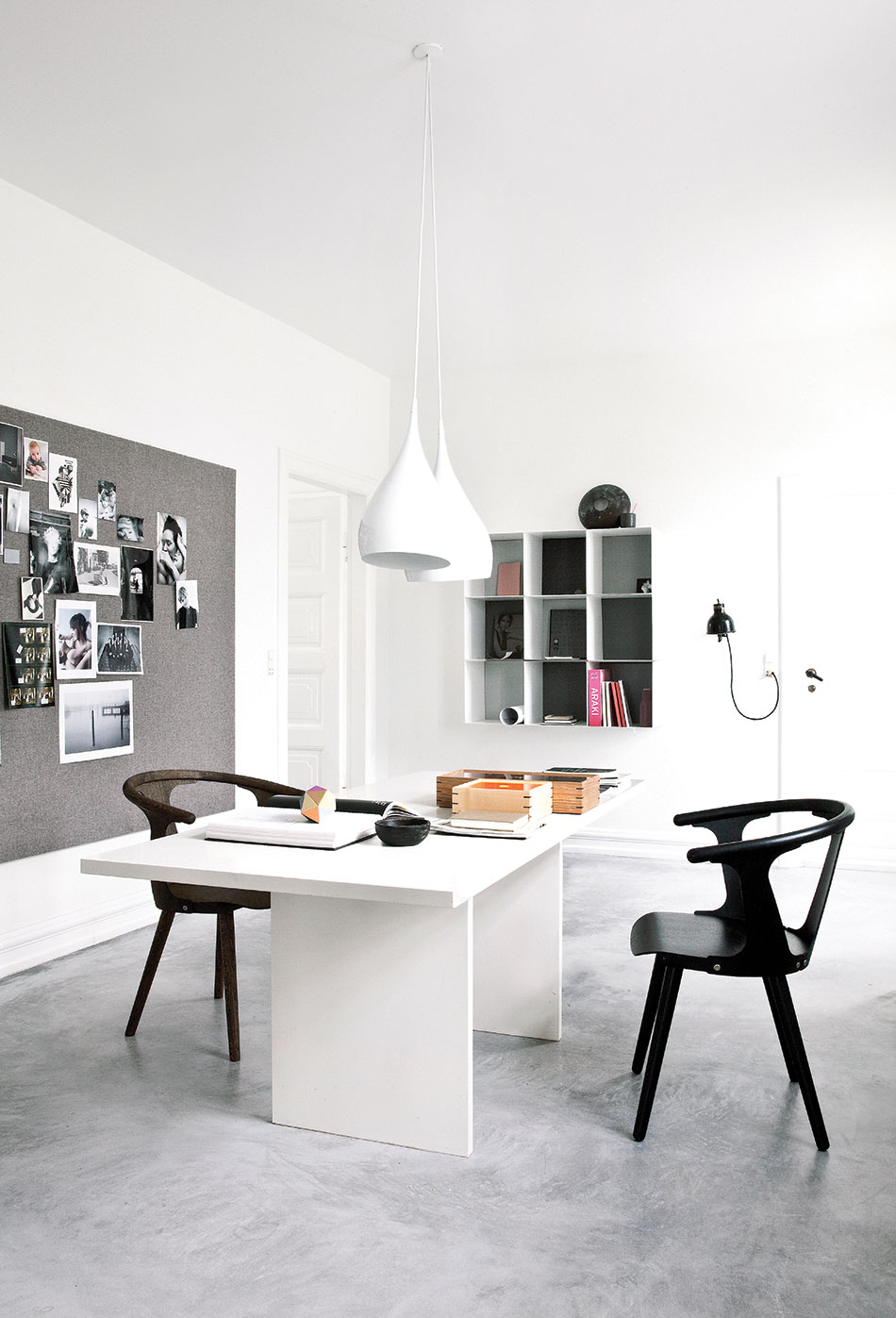 by two graduates of the Royal Danish Academy of Fine Arts who chose the name as a declaration, right from the outset, that they intended to set new standards in Scandinavian design. We are all used to seeing expanses of white, blond timber and the careful juxtaposition of a few well-chosen objects. But NORM’s founders, Jonas Bjerre-Poulsen and Kasper Rønn, are taking that tradition to new levels.

One of the latest projects by the duo is the remodelling of a house at Vedbæk, 20 miles north of Copenhagen and half-way towards Helsingor, facing the Swedish coast to the east. The house is one of the very first you see as you come into the village and it directly faces the marina. It is a tall villa, built in 1911 in an Alpine style with three rows of balconies rising up under its steep roof. It is a most improbable setting for a project by NORM, with their well-known predilection for ‘soft minimalist’ design. Some years ago, Jonas himself moved from an old fisherman’s cottage in the village, where he had lived for seven years, to the apartment on the ground floor of this villa. He wanted somewhere “with both character and soul”, as he put it to me. That character lay deep inside the alpine villa, albeit smothered by a previous owner’s taste for Provençal decoration and a country-style kitchen.

NORM took the house to pieces in order to remake it. Seven different floor types were replaced with a single smooth surface of polished concrete. The country kitchen was removed and the old stone fireplaces were buffed up. But NORM wanted to leave something of the texture of the grand old house. Many of the walls, including those around the elegant bow window in the dining room, were lined with timber – both panelled and match boarded – and this has survived. The first impression when you enter the house is of shimmering white surfaces, beautifully offset by pieces from Jonas’ own collection.

The dining room with the bay window is just beyond the front door of the house on its southern side. Sliding double doors, a feature often seen in Scandinavian houses, lead into the sitting room to the north, dominated by a massive stone fireplace. The room is furnished with a large black sofa and a pair of playful tables with legs like sharpened pencils. This in turn leads left through a pair of doors into the study where two chairs, matching in design but not in colour, are artfully positioned either side of a long white table. The room takes its ornamentation from a large grey pinboard covered in black and white pictures and, very subtly, from the coloured spines of the books on the window sill and in the bookcase at the end of the wall.

From here, you turn left again into the kitchen, which is sparsely furnished with a long worktop along its southern wall, and has merely a free-standing stainless steel hob facing it. The bedroom is reached through the sitting room: you make a corner turn down a few steps, and reach a splendid enfilade, lined on the left by white-painted wardrobes and on the right by tall windows. Another large fireplace closes the view ahead.

I ask Jonas about his design intentions in the project and he tells me how he has been inspired by Japanese interior design: “It’s all about the small fine nuances and details”, he says. And, in fact, many of those nuances here are achieved through the use of white, which is never uniform or monochromatic. Because of the different types and shapes of window and door openings, the surface is really a myriad of tiny and subtle shades of white, silver and grey; in fact the floor, which ought to look industrial, glimmers beautifully, especially when looking down from the study towards the French windows on the eastern side of the house in the morning, a truly inspirational effect upon which to ponder when starting work at that immaculate desk in the morning. One of the reasons why Scandinavian houses have traditionally been painted white inside is because light is scarce, and finds it hard to penetrate a room. Here the surfaces reflect back at one another and the whole suite of rooms comes alive.

I ask Jonas about his design intentions in the project and he tells me how he has been inspired by Japanese interior design: “It’s all about the small fine nuances and details”, he sees it as a place where he likes to experiment with discovered objects and his own ideas. The chandelier above the dining table, for example, is a NORM design called ‘Mass Light’, designed for the Danish company & Tradition, and with its raw marble lamp holder and opal glass diffuser it encapsulates the architects’ aim of combining geometrical purity with simple naturalness in a tactile and sensual way. Both partners worked for five years in the studio of designer Ole Palsby, designing pots and jugs, and they are very much in touch with the physical act of making. The black dining table, with its tubular legs, was also designed by NORM, and their brown clay pots with chunky cork lids and their similarly tactile glassware are further expressions of their approach.

Jonas and Kaspar had worked together for a long time before forming NORM, and there is no doubt that their thoughtful purist approach is now paying off. The beautiful, pared down yet tactile interior for the well-known Höst restaurant near the centre of Copenhagen won them much praise. In the spirit of the great Danish modernist Arne Jacobsen, they designed everything in it, from its rough timber bar which is wonderfully set off by another polished concrete floor, to its lighting and its characteristically curvaceous crockery. It’s about refinement, say the partners: we don’t want to be always searching for something new: we want to go on refining. It seems they want to look to their traditions and hone them into something increasingly perfect. 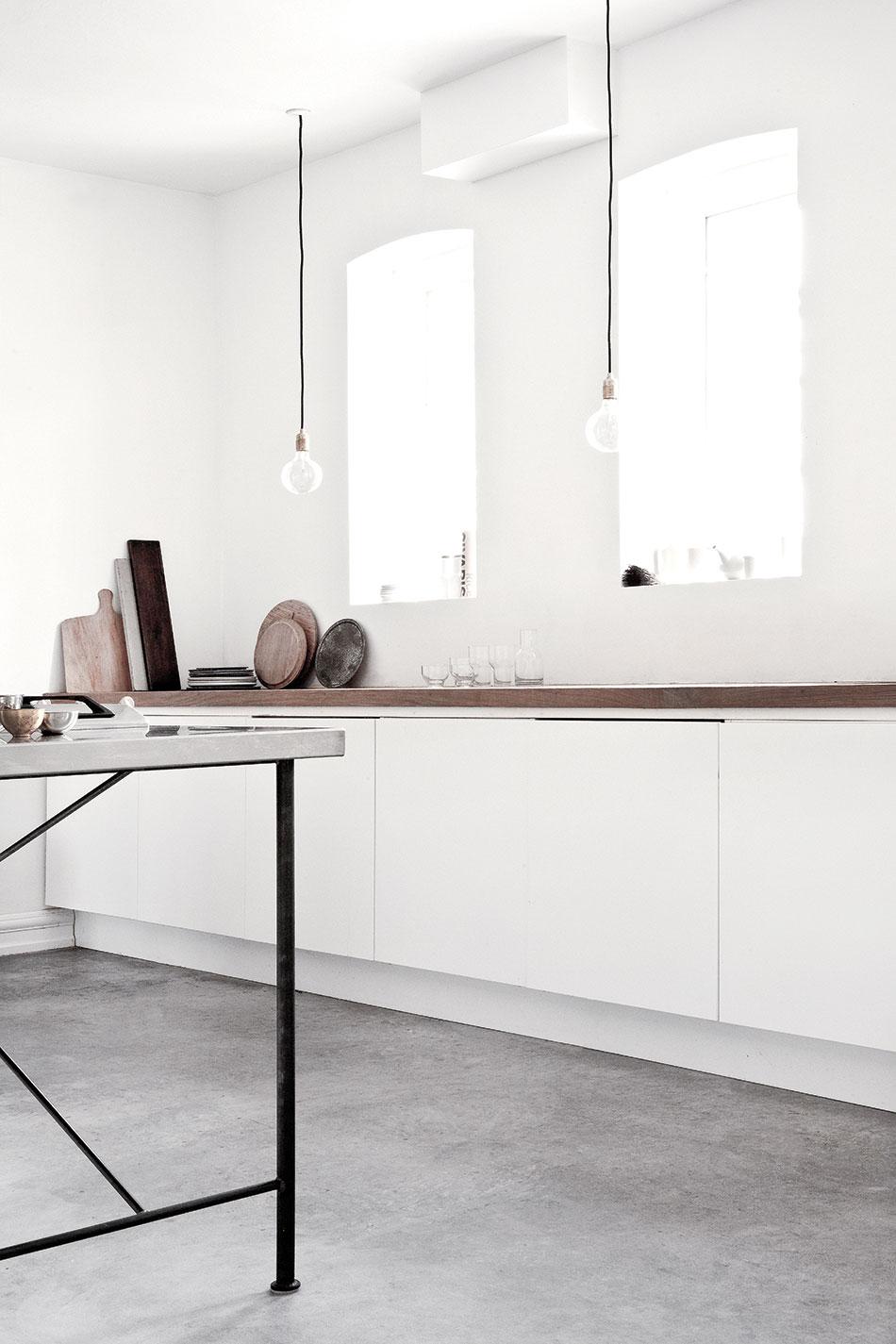 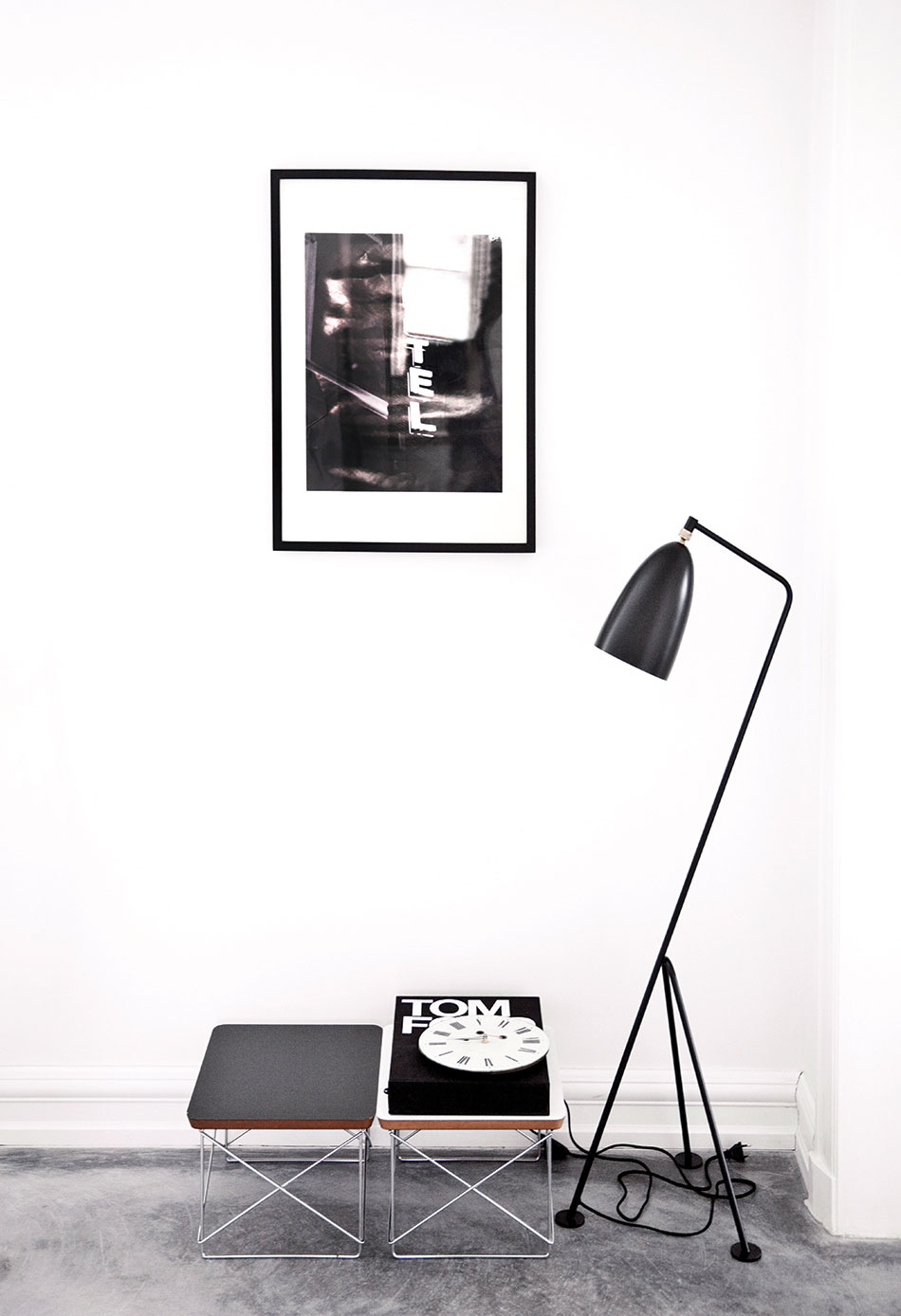 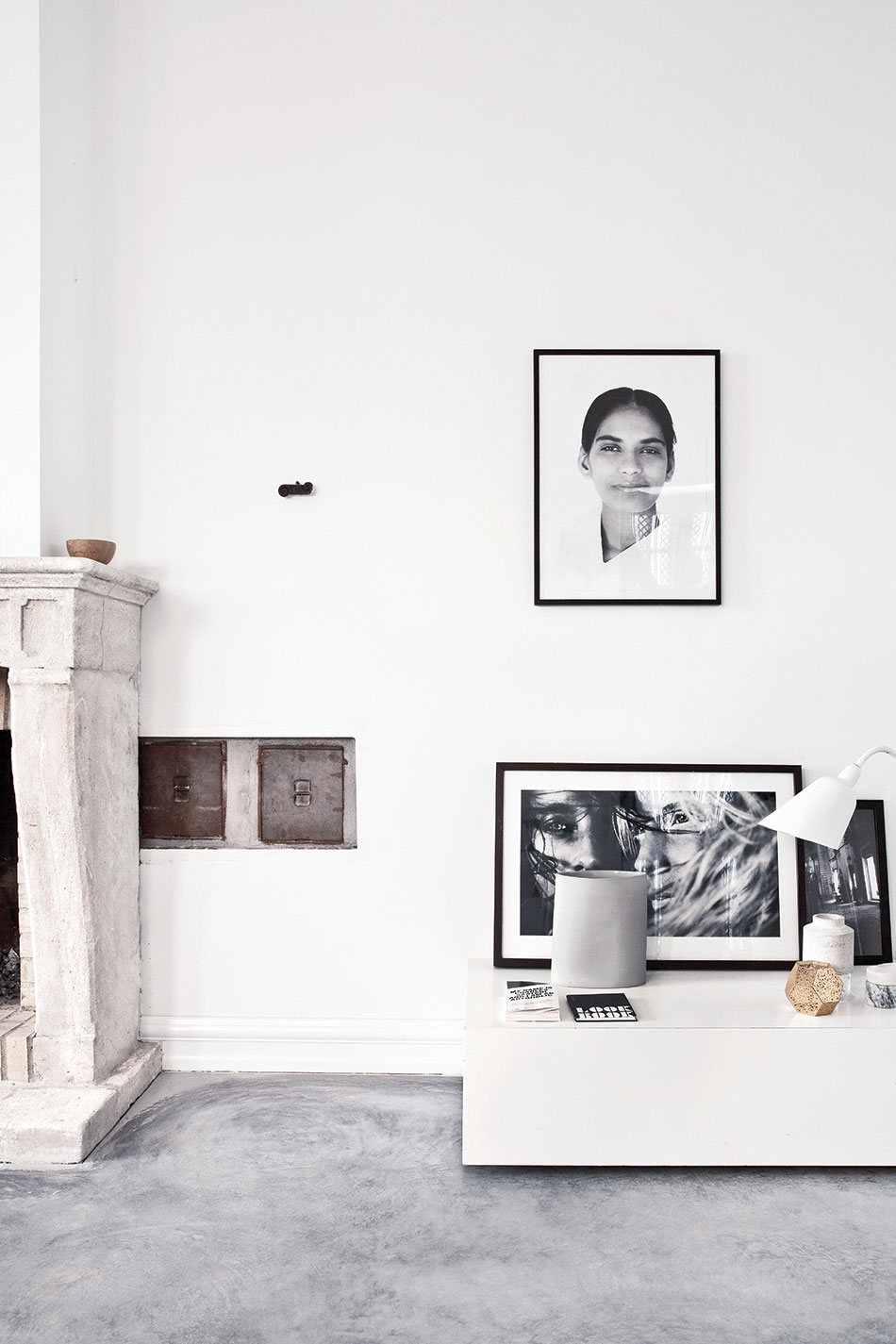 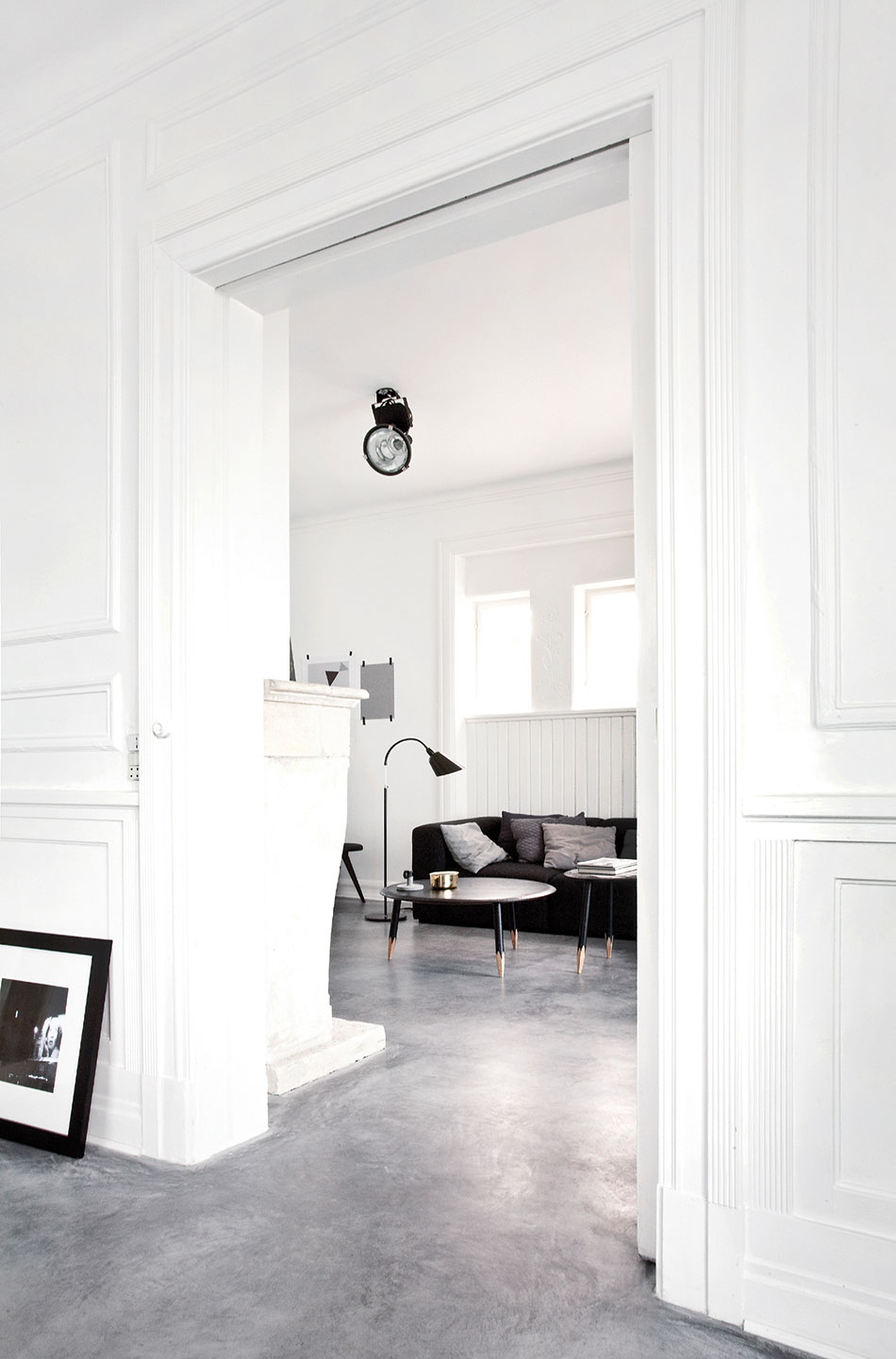 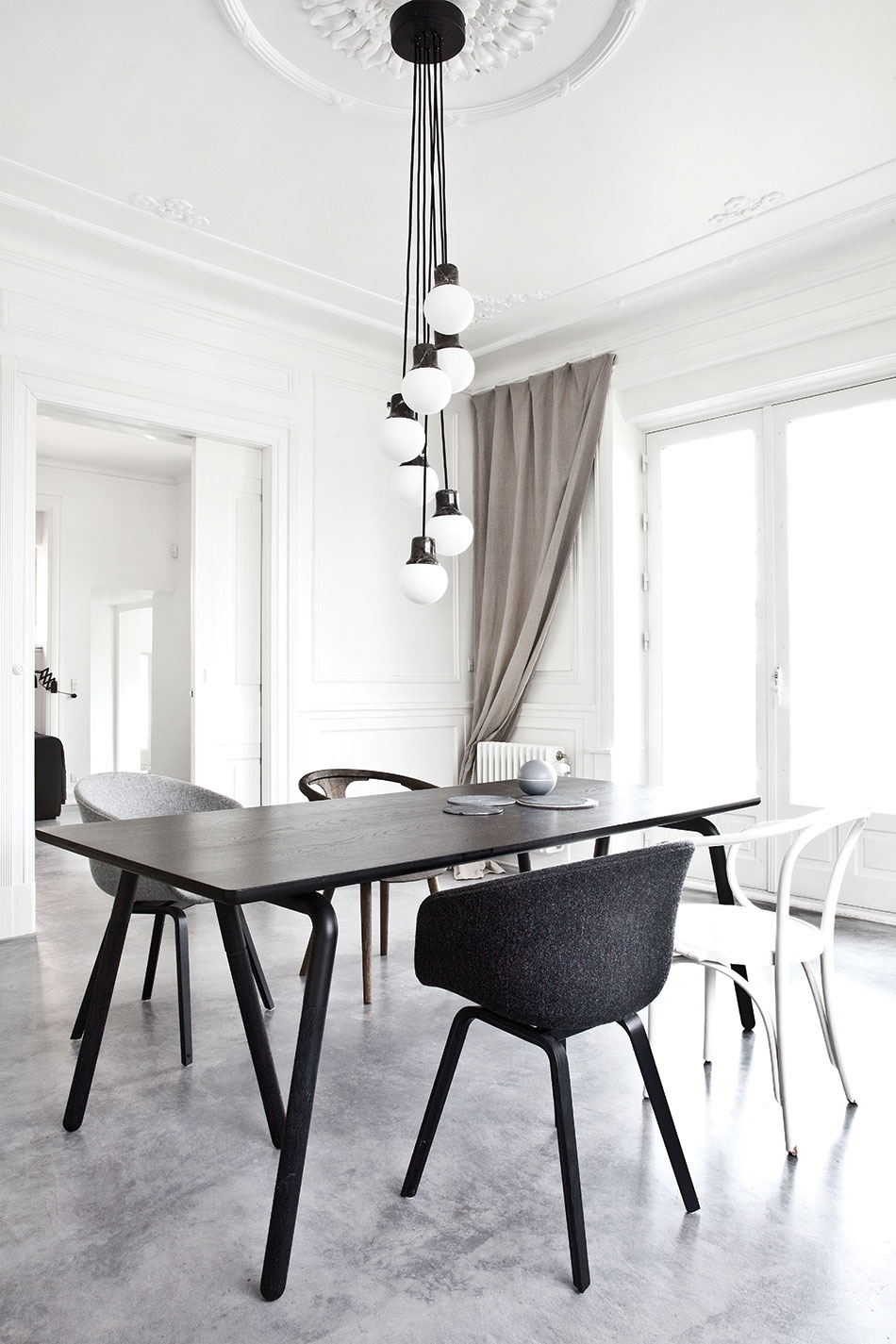 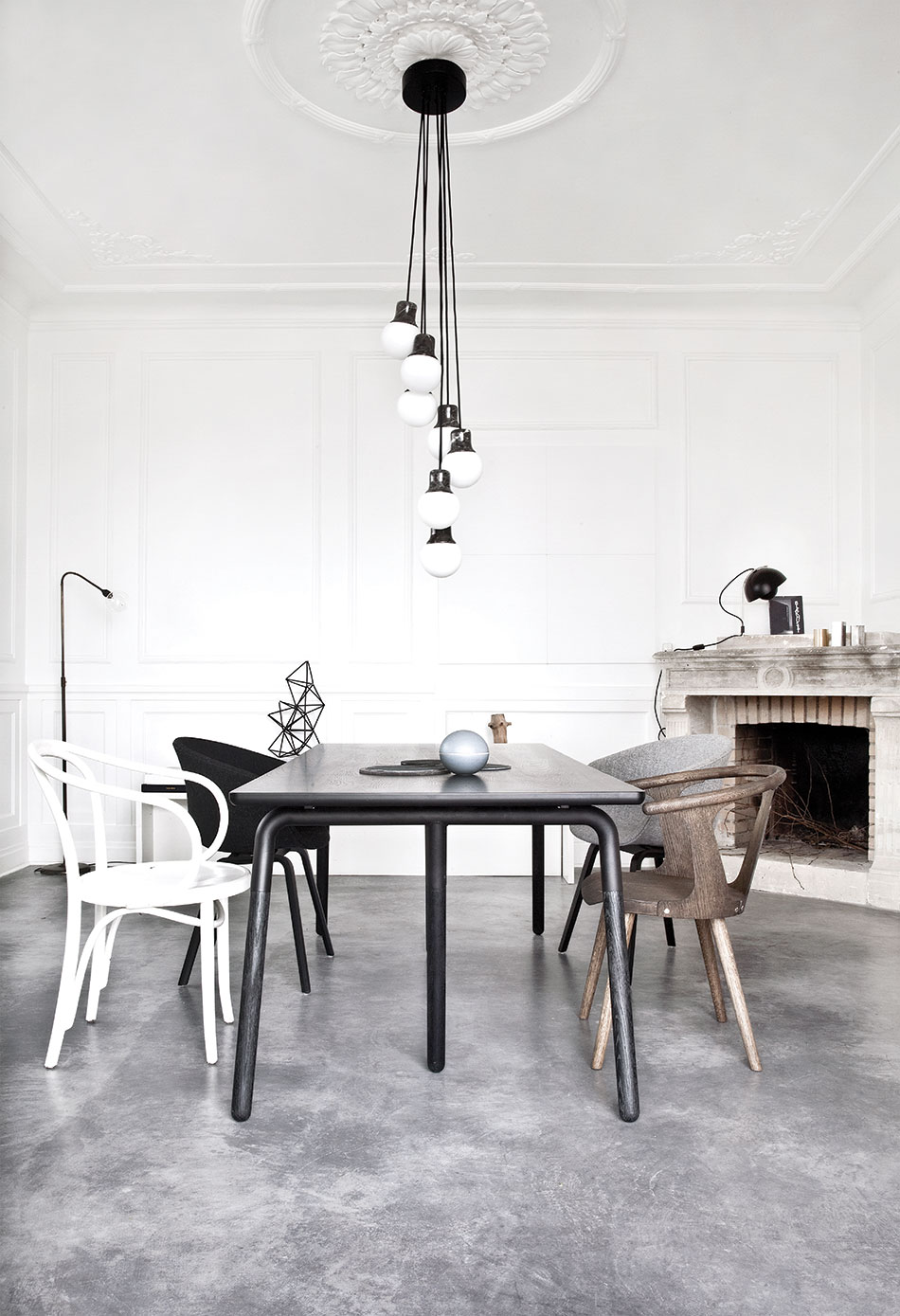 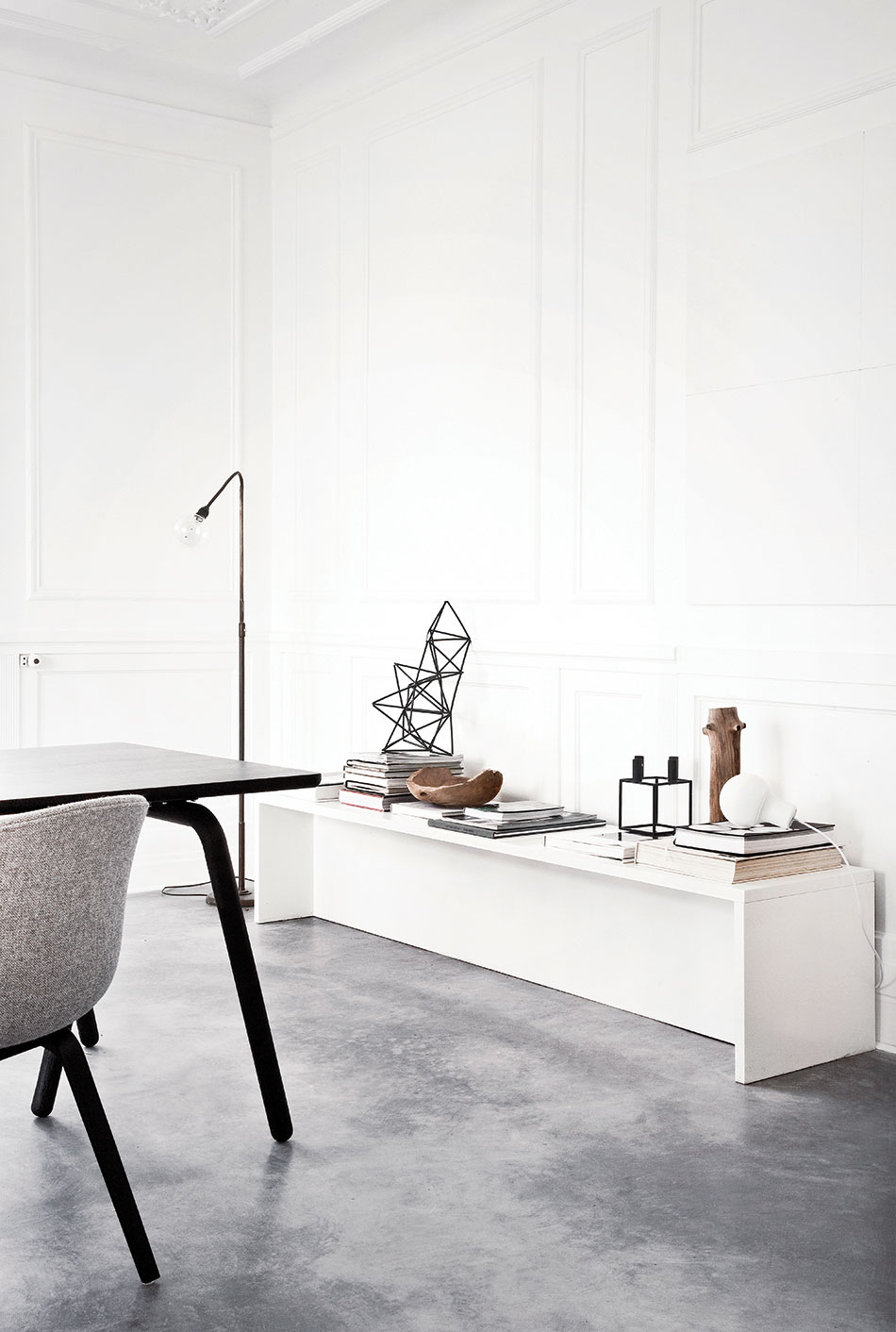 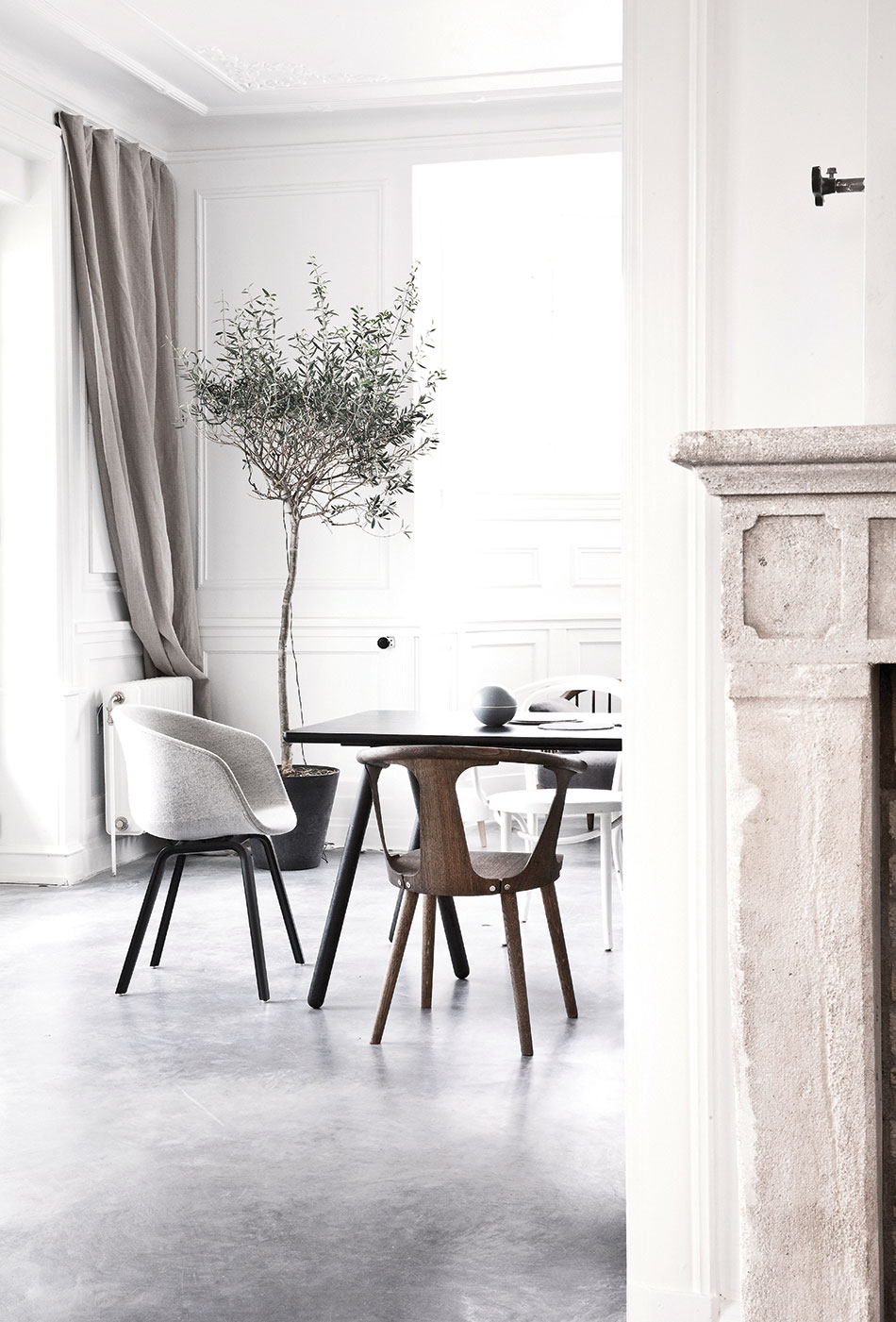 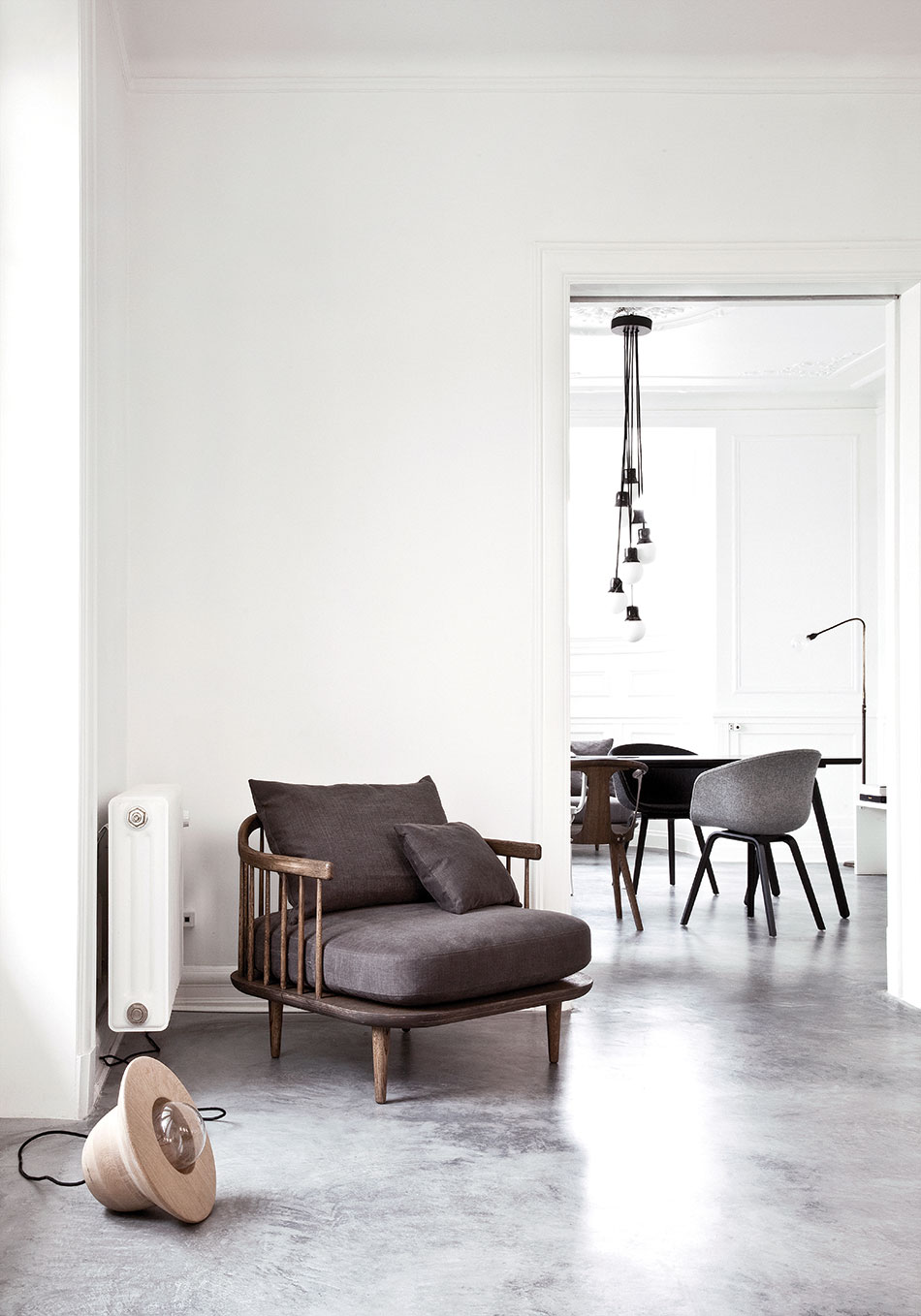 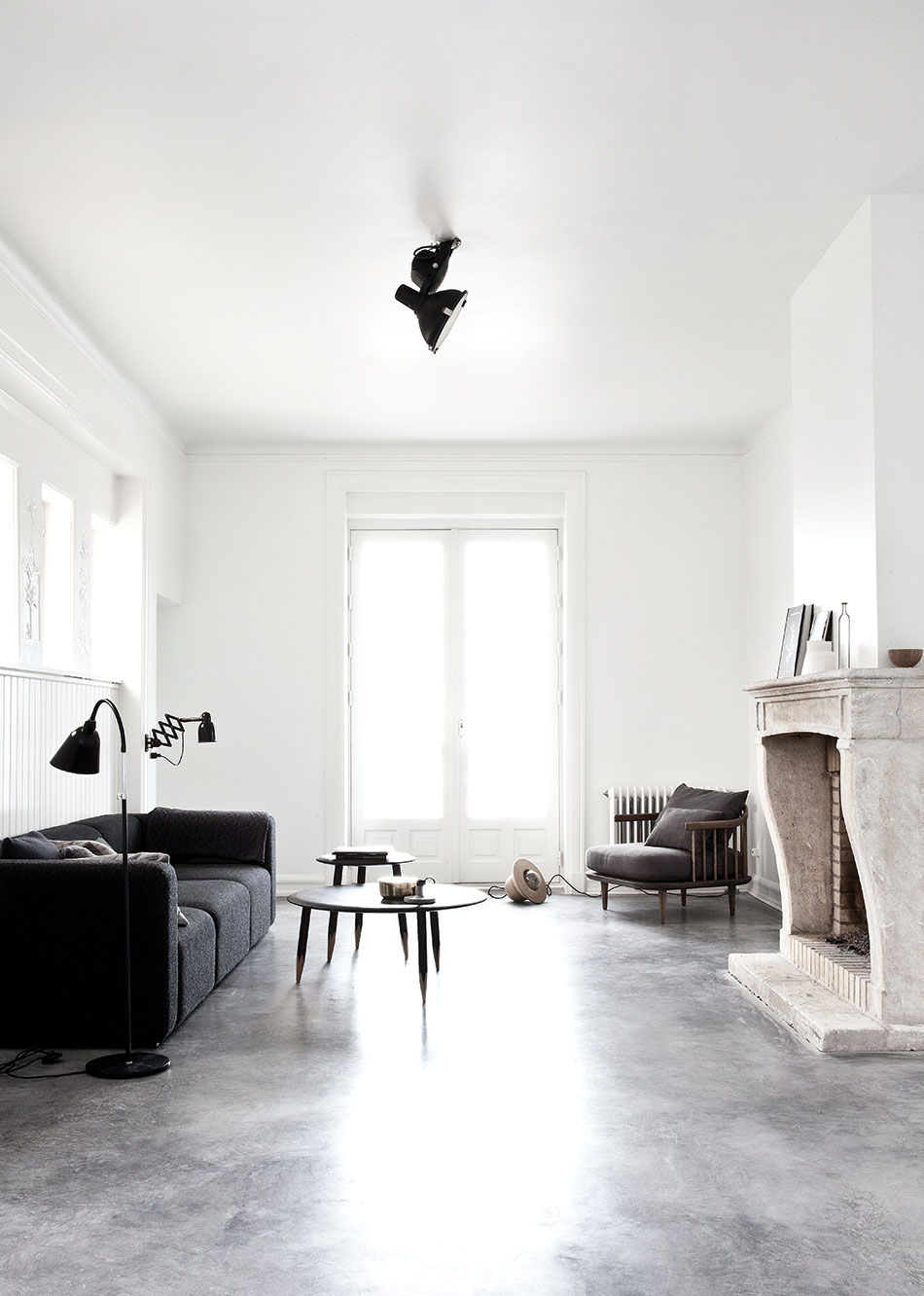 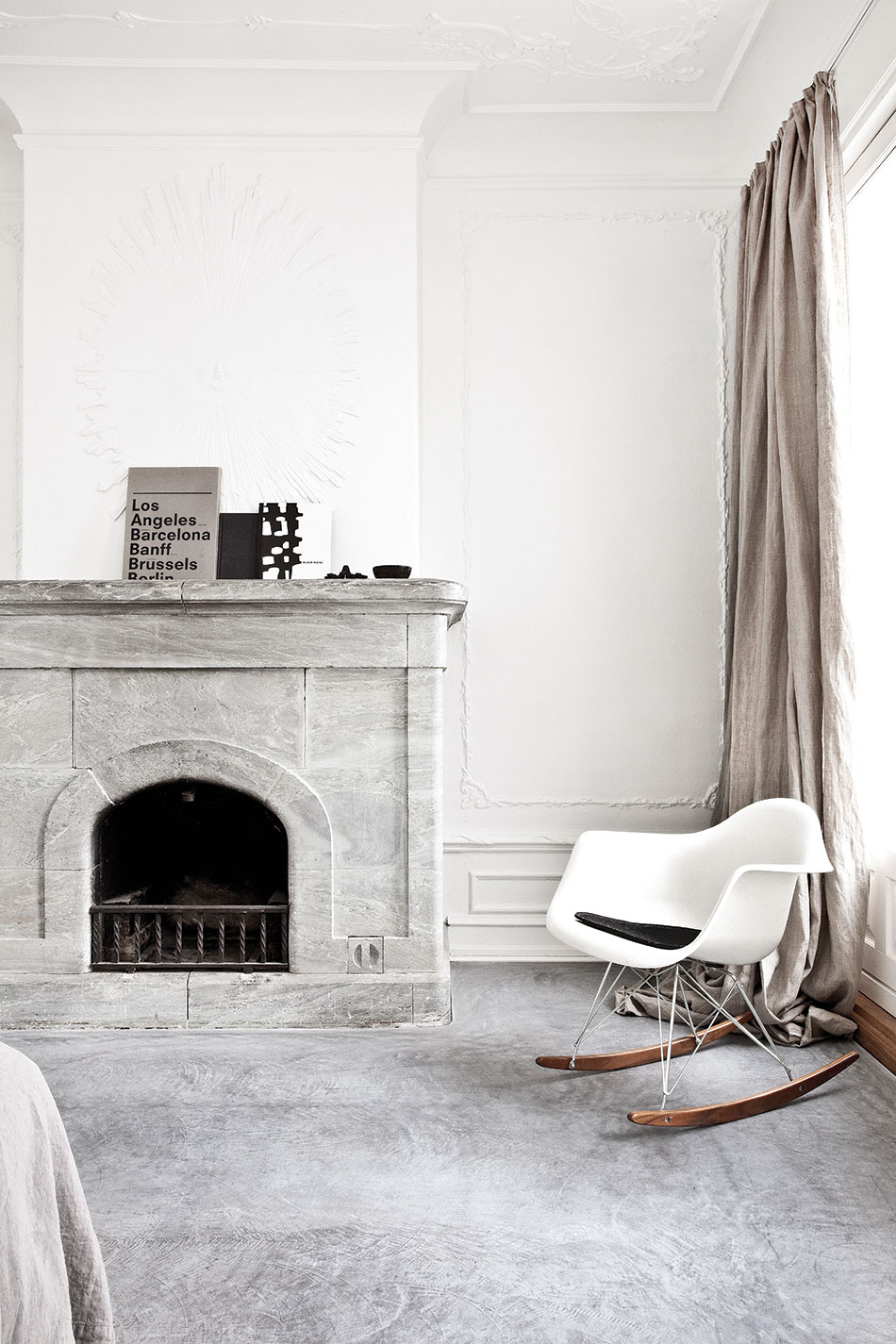 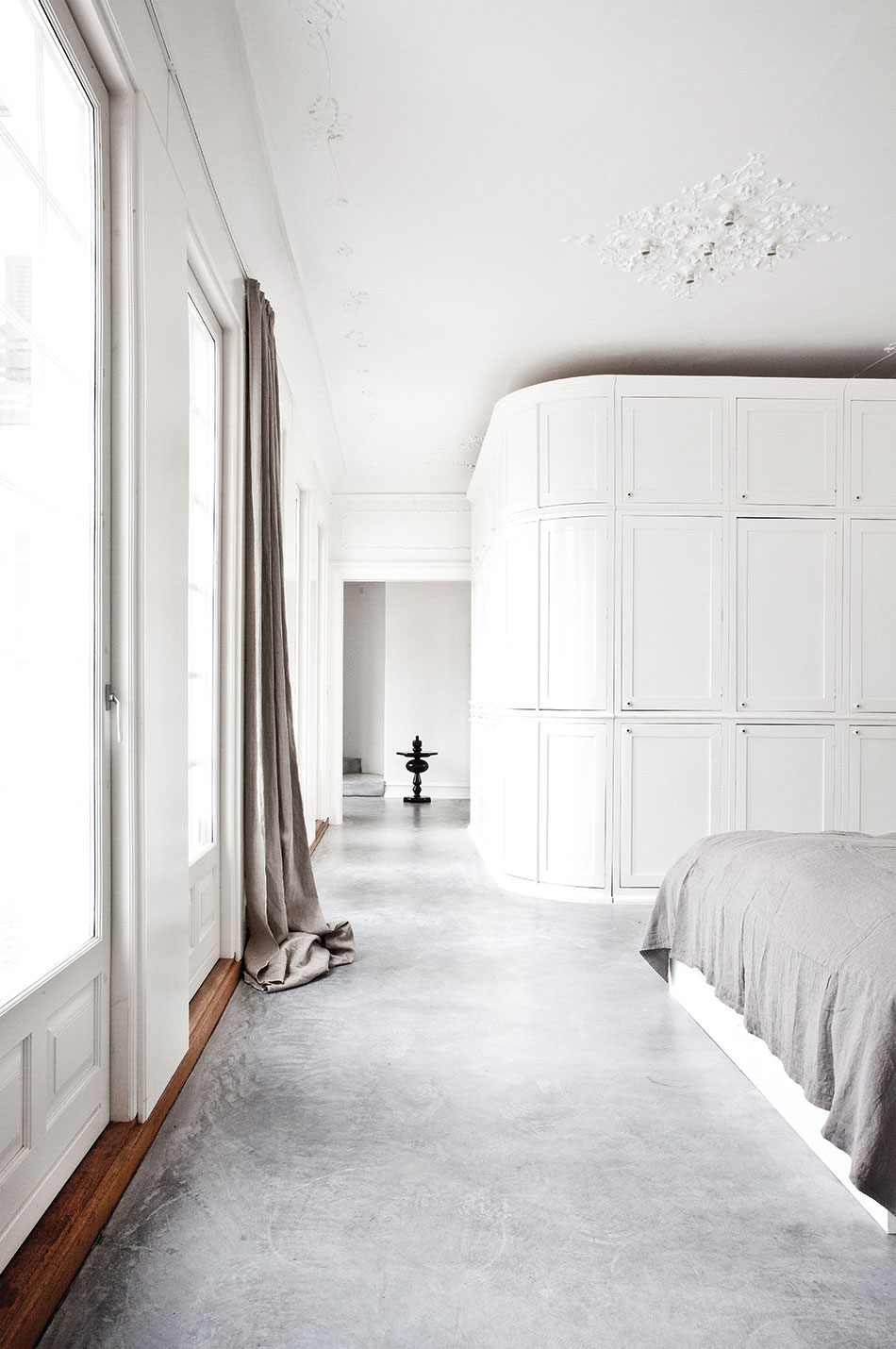