His 1600 eye segments lock on her body. Flying down, he places himself just in front of her, a little to the side. She checks him out – and likes what she sees but doesn’t let him know. He turns around, going behind her, and taps her on her ‘lower end’. Back in front of … Continued 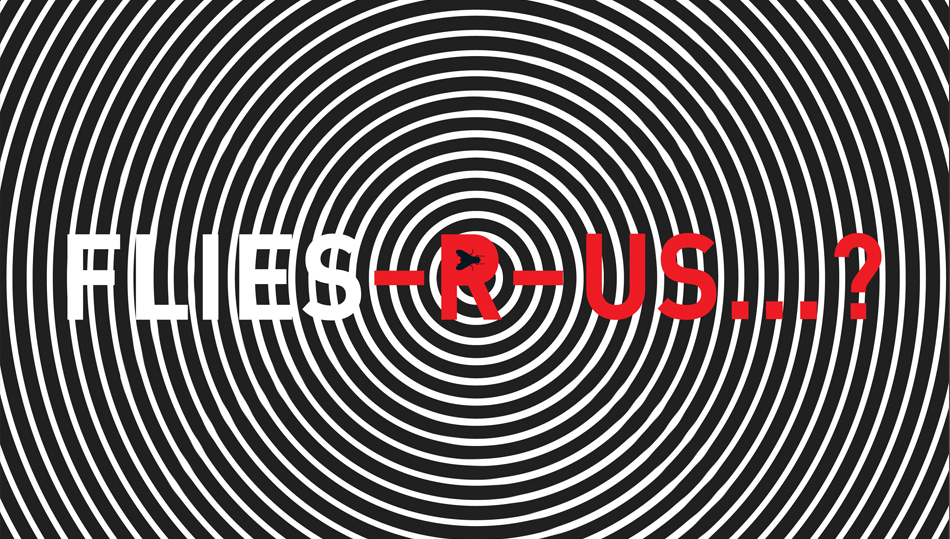 His 1600 eye segments lock on her body. Flying down, he places himself just in front of her, a little to the side. She checks him out – and likes what she sees but doesn’t let him know. He turns around, going behind her, and taps her on her ‘lower end’. Back in front of her he starts to sing, flapping his wings, vibrating the air around her, soothing her. He then tries his luck: turning behind her he licks her – oral sex – then tries to mount her. She likes him, so she lifts her abdomen up, she does nothing else. They have sex. These are Drosophila (or fruit flies).

Fruit flies are 2mm long and live for just 40 days, yet they can find food, learn and remember. As this story shows, they have eerie similarities with humans. And, despite around 500 million years of evolution separating us, fruit flies still share around 70 – 75 per cent of our genes that cause disease. Obviously, flies are not humans, but close enough that we can use them to study ourselves.

In Malta, researcher Ruben Cachia is using fruit flies to study spinal muscular atrophy, a muscle-wasting disease that afflicts human children and eventually leads to death. It is in a class of diseases such as the one that affects the physicist Stephen Hawkins and that led to the death of the communist leader Mao Zedong. In flies and humans this is because of a gene called the “survival motor neuron gene”, without which neurons do not survive.

Neurons are needed to send a signal from the brain to the muscle, telling it to contract. Without this stimulation, muscles are unable to move and the end up shrinking from lack of use. Dr Cachia can manipulate the disease-causing gene in flies, learning more about the condition in humans. It’s a long way away, but it could lead to better treatments becoming available.

“Large pharmaceutical companies use these methods to test thousands of drugs, narrowing down possible treatments for humans”

Pharmaceutical companies also use flies – to test drugs. Imagine a fly that has been modified to make too much of a certain protein in its brain. Excess of the protein causes this fly to start suffering from Parkinson’s disease. Now, imagine that fly is fed a drug and recovers, or maybe remains pretty much the same. A researcher could compare the fly with one that is not receiving treatment, to ascertain which drugs work.

Large pharmaceutical companies use these methods to test thousands of drugs, narrowing down possible treatments for humans. The drugs will still need to be tested on organisms closer to humans, but using this approach has helped reduce the number of dead ends and the number of more complex animals being used to test drugs.

Over one hundred years ago, American scientist Thomas Hunt Morgan started to use flies in research. He and his assistant were the first people to do so. He found out how genes are passed on from one generation to the next and in 1933 was awarded the Noble Prize for Physiology or Medicine.

In 1946, Ed Lewis started to unravel a puzzle – a puzzle that took him over 30 years to bring to the public and the results of which were controversial and shook the scientific world. He found that a set of master genes control whether an organ becomes a heart, wing, leg, or other appendage. Normal fruit flies have a set of appendages called “halters” that help balance them while flying. With a single mutation, those balancing organs can be turned into another pair of wings. Similar rules direct us humans – although we are more complicated – and only a small set of genes give rise to our bodies. The fly taught us about ourselves.

Lewis’s work inspired many other scientists. For example, in 1993 Swiss researcher Walter J. Gehring and his team found another master gene called “eyeless”. When this single gene was expressed throughout the body, eyes started cropping up everywhere. In fruit flies, the tools exist to express genes wherever and whenever a scientist needs.

Another big Q is how do we develop in our mother’s womb? How does one sperm and one egg fuse together, split millions of times and make the 50 trillion or so cells present by adult-hood? Flies provided the answer.In the late1970s and 80s, Christiane Nusslein-Volhard, Eric Wieschaus and their team performed a screen that would uncover hundreds of genes vital for development. They fed adult flies a chemical that mutated their DNA. These mutated flies had offspring that carried these mutations, so they then looked at the embryos of these flies. The fly embryo has a very precise layout, so the researchers could easily spot changes when they found them, and they kept finding countless important clues to human development. Problems in development affect millions of people and lead to diseases as far-ranging as from various degrees of physical disability to cancer. In 1995 they were joint winners of the Noble Prize for Physiology or Medicine.

The fruit fly is small, quite simple and easily killed – usually by swatting – to prevent it spoiling fruit, its favourite food. Despite its natural bad looks, by studying this insignificant little fly we have learnt so much about what it is to be human.

The humble fruit fly is even inspiring artists. Fruit flies feature in films, performance art, dance, digital art, installations and even food art. Malta is no exception and on the 28 September, Science in the City (Researchers’ Night) will hit Valletta’s streets, filling them with science-inspired art, including some fruit flies by Liliana Fleri Soler. She will be exhibiting six-foot tall fruit flies in Merchants Street, acting out the wonderful behaviour of flies. An art exhibition called HOW? will run from the 27 September until the 28 October at St. James Cavalier exploring various scientific phenomena.

Their sex is decided by XX (female) and XY (male) chromosome, like us.

The fruit fly is 2mm long, with 2mm sperm.

The female can store sperm for two weeks in spermathacea.

She can mix the sperm of different fathers and choose the best for her eggs.

The males have spiky hairs called “claspers” to attach to the female during mating.